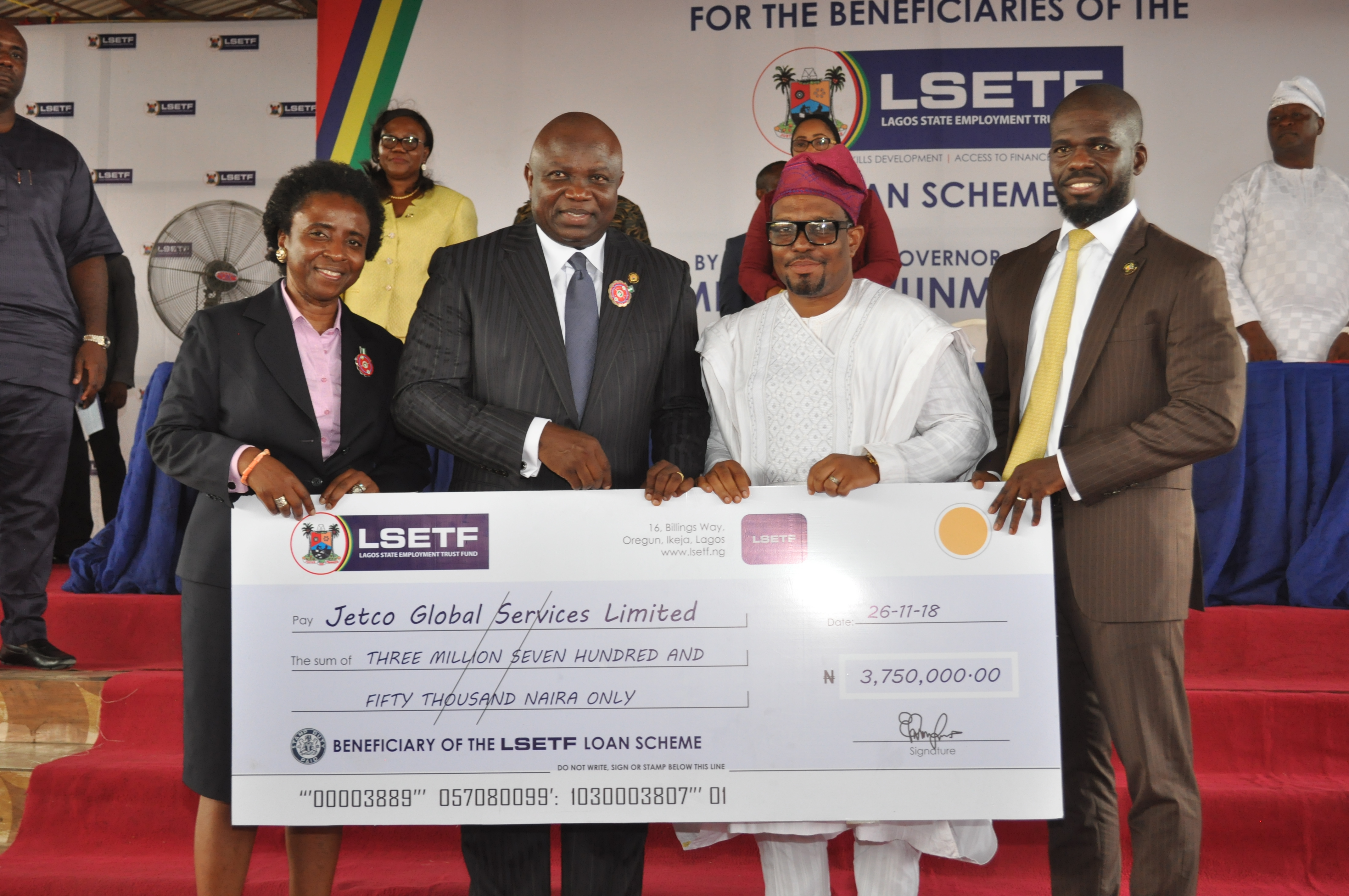 Lagos State Governor, MrAkinwunmiAmbode on Monday November 26,2018 presented cheques to another batch of over 2,000 beneficiaries of the Lagos State Employment Trust Fund (LSETF) loan programme, saying it was gratifying that the initiative was meeting the objectives of creating jobs and contributing to the growth of the economy.

This is in addition to the over 10,000 beneficiaries who have received more than N7billion and have created over 25,000 new jobs in the last three years.

Speaking at the presentation ceremony held at LTV Blue Roof, Agidingbi, Ikeja, GovernorAmbode expressed fulfillment that the initiative, which is a brain child of his administration, had positively impacted many Lagosians and help to scale up entrepreneurship with many businesses now thriving.

“Today is a historic day. It is one of those days that we have this fulfillment that we tried our hands on something that was never done before and years after, we are able to see the result and I just want to say a big thank you to all of you that have accepted to be partners in this programme and to just congratulate ourselves that a day like this can come in Lagos State.

“I am particularly delighted to be here today to see for myself the manifestation of a small dream we had at the inception of this government and the little seed we have sown in the lives and businesses of Lagosians. The Employment Trust Fund was a promise we made to Lagosians in 2015 and today, I am happy to see the faces of the people whose lives and aspirations have been positively impacted by this programme,” Governor Ambode said.

While noting the positive difference the beneficiaries of the scheme were making in the State, the Governor said the wonderful stories about the initiative were the true outcomes of governance, saying the vision was to use it to grow Lagos economy by supporting entrepreneurship, which in turn, would help to create jobs for unemployed residents.

The Governor said in line with his promise of inclusive governance, the beneficiaries of the LSETF programmes range from the youth to senior citizens in active business across all 20 Local Government Areas (LGAs) and 37 Local Community Development Areas (LCDAs) in this State, adding that the positive stories emanating from beneficiaries were pleasing to note.

“Apart from the jobs being created, I am especially pleased to see testimonials from some of our beneficiaries. I watched the video of Ibrahim Shuaib; a final year student of Dentistry at the Lagos State University Medical School. With a loan of N250,000, Ibrahim has not only grown his dry-cleaning business, employing over 20 people, but also started another business which his sister runs.

Aside the loan, the Governor said he was also proud of another programme of the LSETF known as the Lagos Employability Support Programme being executed in partnership with the United Nations Development Fund (UNDP), revealing that 3,363 unemployed youth have so far been trained out of the 10,000 target, with over 1,100 of them now either employed or running their own businesses.

On efforts of the LSETF to make Lagos the leading destination for Africa’s most exciting tech talent and start-ups, the Governor said it was pleasing to note that under the Lagos Innovates Programme, 75start-ups have been awarded workspace vouchers which provide their businesses with access to excellent infrastructure and a community where they can incubate and pursue their dream of becoming Africa’s emerging unicorns, without bearing the associated cost, adding that a loan had equally been awarded to one of the leading hubs, to expand and incubate more technology start-ups in the Lagos environs.

Giving a breakdown of the loans and women participation, the Governor said: “Our commitment to women is evident in the number of women who are beneficiaries of the programmes of this Fund. Before today we had a total of 3,652 female loan beneficiaries to the 4,280 male loan beneficiaries. Under our Lagos Employability Support Programme, women represent 49% of the total number of young people that LSETF has trained while in our Lagos Innovates programme which supports a tech ecosystem dominated by men, 21% of the beneficiaries are women.

“In spite of this, the Fund has assured me of their work to increase the level of female participation across all programmes, especially within Lagos Innovates,” he said.

While charging the beneficiaries to use the funds to grow their businesses and pay back as at when due, Governor Ambode also expressed optimism about the sustainability of the scheme, saying it was instructive that the governorship candidate of the All Progressives Congress (APC) in the State, MrBabajideSanwoOlu had already expressed commitment to the initiative.

Besides, the Governor commended the Chairman, Executive Secretary, Board members and Staff of the LSETF for a job well done and translating the dream of his administration to reality and bringing the scheme to Lagosians.

In her welcome remarks, LSETF Board of Trustees Chairman, MrsIfuekoOmoiguiOkauru said the presentation of cheques was another milestone in the journey of providing financial support to micro, small and medium enterprises for economic growth and job creation.

While appreciating various agencies and institutions who partnered with the LSETF to bring about the successes so far recorded, Omoigui-Okauru also urged others to take a cue from such by collaborating where and when necessary to further advance the objectives of the initiative.

Responding on behalf of the beneficiaries, MrAdeoyeOlumide of Jetco Global Farms whose company was granted N3.750million loan, said aside that he applied and got the loan without knowing anybody in government, the multiplier effect of the scheme was amazing as more people would be employed to his business.

“This is so unbelievable and it is so amazing. The domino effect on the entire value chain with this empowerment is very laudable and very commendable,” Olumide said.