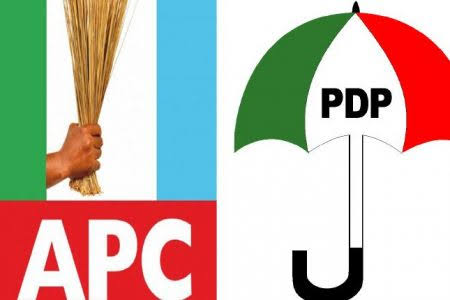 APC, PDP in Verbal War over Sponsorship of Protests

The ruling All Progressives Congress (APC) and the Peoples Democratic Party (PDP) yesterday engaged in a war of words over the sponsorship and killing of #EndSARS protesters.

While the PDP charged President Muhammadu Buhari and the APC to take responsibility for the shooting and killing of peaceful and unarmed young protesters by military operatives at Lekki Toll Gate in Lagos on Tuesday, the APC accused the leaders of the main opposition party of playing politics with the protests.

In a statement issued yesterday by the National Publicity Secretary of the PDP, Mr. Kola Ologbondiyan, the PDP said as the Commander-in-Chief of the Armed Forces, the bulk stopped at the table of Buhari and that he should take responsibility for what happened.

The PDP said: “Our party is, however, shocked at President Buhari’s stance, particularly his inability to demonstrate the capacity for concerned, attentive and proactive governance and command structure, while the nation he presides over dangerously slides into anarchy.

“A well-structured governance response from Mr. President, as the father of the nation, would have calmed frayed nerves and averted the crisis, violence, deaths, destruction of property and the avoidable loses we are witnessing today.”

The party said it was heart-rending that the once united, viable, resilient and cohesive nation handed over to Buhari in 2015 is fast collapsing in his hands.

PDP explained that in countries where presidents are alive to the demands of their offices, such countries would not be in turmoil with citizens being murdered in cold blood as witnessed in the country in the last 48 hours, yet the citizenry cannot find their president or prime minister coming out personally to offer consolation, provide direction and give hope.

The main opposition party said that the video showing police vans and vehicles belonging to other security agencies bringing in and coordinating armed thugs to attack peaceful protesters in Abuja points to serious complicity in high places.

According to the PDP, the ruling party and its agents in government circles had kept mute over reports in the public space that they are behind the deployment of the armed thugs to infiltrate peaceful protests and perpetrate acts of violence so as to discredit the demonstration and justify their attacks on protesters.

PDP said that the unexplained dismantling of security cameras and lights at the Lekki Tollgate before military operatives opened fire on peaceful protesters, further points to high-level conspiracy against Nigerians.

“Such unleashing of terror against peaceful demonstrators exposes a dangerous recourse to barefaced brutality, violence and killing to suppress and subjugate the Nigerian people,” it said, adding: “Today, under the APC, our streets are stained with the blood of our promising young ones. Our highways have been turned into battlegrounds where thugs and security operatives mow down citizens and destroy property with reckless abandon.”

But in a swift reaction, the ruling APC accused the leaders of the PDP of playing politics with the protests.

The Deputy National Publicity Secretary of the party, Mr. Yekini Nabena, in a statement issued yesterday, said since the protest started, the PDP had taken over the social media, making various unguarded assertions thereby fueling the protest.

It alleged that it was on record that one of the leaders of the protests in Akwa Ibom State had publicly admitted that the Governor, Mr. Udom Emmanuel, gave N4 million for onward sharing to the protesting youths in Uyo, the state capital.

It alleged that one Kufre Carter, who was one of the organisers of the protest reportedly said he got a call from the governor’s aide on youth matters whom he said told him that the governor gave N4 million to be shared to the protesters.

The APC stated: “The governing All Progressives Congress (APC) will not [take] issues with the opposition Peoples Democratic Party (PDP) on the development, which the #ENDSARS protest has taken.

“The party will rather place on record how PDP and its leaders are directly and indirectly sponsoring the protests and playing politics with the development.

It said all leaders, including the PDP’s, should know that it is only when the country exists in peace that one can achieve their goals, saying no one can be a leader through chaos.

The ruling party appealed to the protesting youths to give dialogue and peace a chance while ignoring insensitive fuelling by the PDP. I