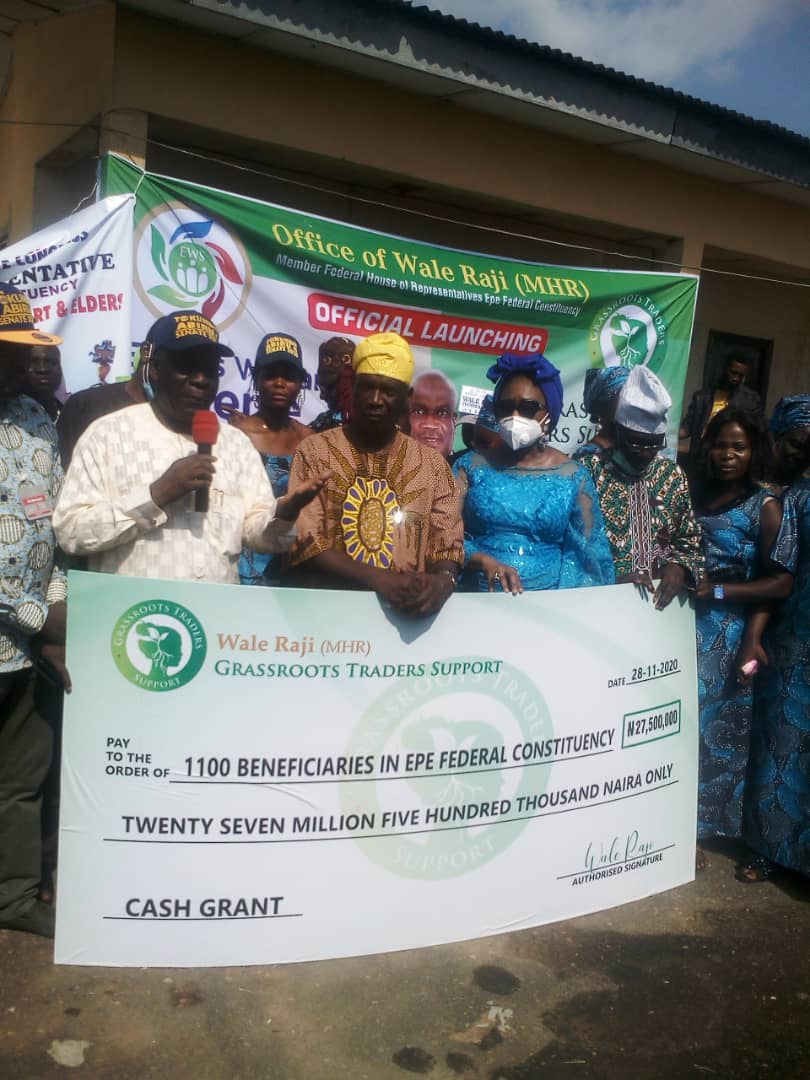 On Saturday November 28,2020, many dignitaries from all walks of life stormed Epe to celebrate with the people of Epe Division and their Representative in the Federal House of Representatives,Abuja,Hon. Tasir Olawale Raji on the higher level he has taken Empowerment of his Constituents to; and to also see what other dividends of democracy he still have for the electorates.

While rendering the account of his Stewardship before these high profile personalities and his constituents,Hon Wale Raji revealed that his first motion on the floor of the House in the year 2016 was on the electricity situation in Epe. He said he was glad that his efforts on the situation has continued to yield positive results, as Omotosho- Epe-Ajah Power Project is on going. He also stated that his efforts on the dilapidated condition of Roads that link Epe had been successful with the recent Flag-Off of Reconstruction of Lekki- Epe Road by the Lagos State Governor,Mr Babajide Olusola Sanwoolu;and the intervention of government on Epe- Itoikin Road.

Hon. Wale Raji,brought to the fore the challenges of Schools in his Constituency, as he said,overcrowding has caused some School Principals to write letters to him,requesting for his aid on provision of classrooms. He announced at the event that he had commenced the construction of a Block of Six classrooms with VIP Toilet,in each of the affected schools, namely: Army High School, Epe,L.G Community Primary School, Oriba,Odomola Secondary School, Agbowa Community Senior Secondary School. He told the people at the event that Fully Equipped ICT Centre project his ongoing at Epe Girls High School. He also promised to extend the the provision of the the Block of Classrooms to Odo Ayandelu,revealing that the monarch of the town,HRM Oba Aderibigbe Asunmo had requested for that.

Hon. Raji stressed that he was very much glad with the achievement of Wale Raji Youth Empowerment Scheme(WRYES) and Wale Raji Poverty Alleviation Programme(WRPA),saying many youths and other individuals had been trained and equipped through the two programmes.
On the event this fateful Saturday, he said had only raised the bar on his empowerment programmes, especially at this time that his constituents are also affected bitterly by the economic hardship in the World due to Lockdown as a result of COVID-19 Pandemic. He said as intervention to his people’ Challenges 1100(One Thousand and One Hundred) Traders,who are women have been selected to receive a cash grant of #25,000(Twenty Five Thousand Naira) each, under his Grassroot Traders Support Initiatives;while 100(One Hundred) Senior citizens had been selected to across the division to receive a constant monthly stipend of #10,000(Ten Thousand Naira) each for the welfare, under his Elder’s Welfare Scheme. He proposed to extend the good gesture to Transporters,Artisans and others as soon as possible. He thanked the Constituents and the leaders of his political party for their supports as he vowed never to disappoint them.

After the presentation of the cash grants totaling almost #29,000,000(Twenty Nine Millions Naira) to the beneficiaries selected across the Epe Federal Constituency and goodwill messages from some dignitaries, the event was brought to a memorable close ,but the beneficiaries have continued to pray for their benefactor, Hon. Wale Raji,and have decided to keep supporting him.

Why We Must Appreciate God For 2020 – Speaker Obasa