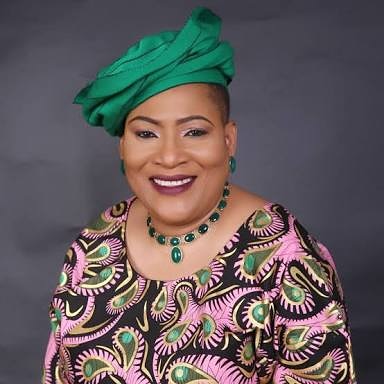 Hell was let loose on Monday 27 August, 2018 as the South West Women Leader of the All Progressives Congress (APC), and an Executive Director of National Social Insurance Trust Fund (NSITF), Chief (Mrs.) Kemi Nelson invaded the Lagos State secretariat of the party with thugs.

Sources revealed that some executive members of the party in the state were having a meeting in the office of the state Chairman of the party, Hon. Tunde Balogun, when Kemi Nelson stormed the secretariat with about six thugs.

Sources disclosed that the thugs went straight to the State Women Leader of Party, Hon. Jumoke Okoya-Thomas at the party chairman’s office and warned her to behave herself, while trying to provoke her to a fight, but Okoya-Thomas kept her cool and did not utter a word, but rather left the meeting for her make-shift office in the secretariat.

It was however gathered that Kemi Nelson and her hoodlums were still not satisfied.

“The thugs then went outside the office where they sighted the Personal Assistant of Hon. Jumoke Okoya-Thomas, Alhaja Abiodun and engaged her in a serious fight that caused the PA serious body injury to the extent that she lost a lot of blood in the process.

“Alhaja Abiodun had to be rushed to a nearby hospital, else she would have lost her life over unnecessary jealousy and envy.

“Only God knows what Kemi Nelson wants after she has been elevated from the state Women Leader to the position of South West Women Leader of the party apart from being an appointee of President Muhammadu Buhari as a board member of NSITF,” said a source.

Investigation revealed that the crisis between Jumoke Okoya-Thomas and Kemi Nelson started shortly after Okoya-Thomas was sworn-in as the state Women Leader of the party.

It was gathered that Kemi Nelson refused to hand over to Okoya-Thomas. Till date, she is yet to vacate her office in the state party Secretariat to the latter, to the chagrin of watchers of events.

Sources revealed that all efforts made by the common friends of the duo to resolve the matter between them were rebuffed by Kemi Nelson, who has vowed to make things difficult for Okoya-Thomas.

Sources informed us that the office of the South West APC Women Leader was intentionally created for Kemi Nelson by the leaders of the party, who had pre-empted what is happening at the moment, and that Kemi Nelson is still not happy and that she has vowed to ensure that “Jumoke Okoya-Thomas does not succeed as the Lagos APC Women Leader no matter how hard she tries.”

Related Topics:CoverstoryKemi Nelson
Up Next