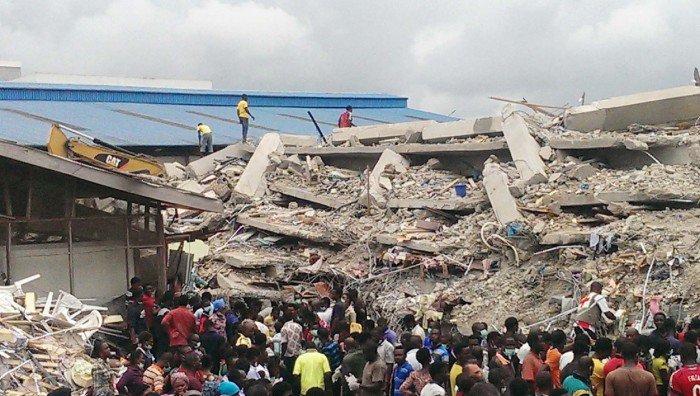 “We have a stable terrain in Ikotun Egbe. I have been in this place for about 30 years with no record of building collapse. As a minister of the gospel, our first priority is saving lives. There is no compromise in what we do at all. We have left the security to do their job. Let us believe and educate our people and be alert. This is not the first time. No matter how long a lie is sustained, truth with some day prevail. We should remember the militant who came here with a bomb but eventually was arrested. People said it was a lie.” The above were the words of Prophet T.B. Joshua following the September 2014 collapse of one of the church’s buildings.

It was both shocking and horrendous; an experience no right thinking individual would quickly forget. The fatalities were huge and the level of damage could only be imagined. About four years ago, the devil and his cohorts raised their ugly heads to frustrate the wondrous work that the Almighty God had appointed the senior prophet of the Synagogue Church of All Nations, Prophet T.B. Joshua, to carry out to all nations of the world: the preaching of the gospel and bringing healing, hope and health to a troubled world in the name of Jesus. In September, 2014, one of the guest houses owned by the church had crumbled killing many and bringing a dark cloud to temporarily bear on the church of the living God. The world was shocked yet true believers and followers of the man of God were not discouraged.

Speaking to a rather troubled world, Prophet Joshua had insisted that God was behind him and that the perpetrators of the dastardly act would be brought to book. He contended that the CCTV coverage of the incident clearly indicated that an aircraft flew at an altitude that was dangerously too low thereby triggering the collapse of the building. Cynics and critics of the man of God laughed, debunking his stand that the collapse of the building had nothing to do with the structure of the building. That building did not collapse as a result of any result resulting from the structural integrity of that property.

After almost four years, precisely in May this year, an Assistant Commissioner of Police, Alaba Haruna, told a Lagos High Court that an aircraft flew over the Synagogue Church of All Nations building at Ikotun-Egbe, just before it collapsed on September 12, 2014.

He said one of his patrol teams observed an aircraft flying low over the church and other buildings in the premises.

Mr Haruna testified before Justice Lateef Lawal-Akapo of an Igbosere High Court on Lagos Island as a defence witness in the trial of the registered trustees of the church and four others.

The other defendants were the two engineers who built the building: Messrs Oladele Ogundeji and Akinbela Fatiregun, and their companies, Hardrock Construction and Engineering Company and Jandy Trust Ltd.

It must be stated that Mr Haruna, Area Commander of the Eastern Ports Command, Port Harcourt, Rivers, was the Divisional Police Officer at Ikotun-Egbe at the time the building collapsed.

For the avoidance of doubt, it is indeed worthy to here make a recap of what Mr Haruna said: “On that fateful day on September12, 2014 at 12.30 p.m., there was a radio communication from the police control room at Ikeja that they were receiving calls from the public of an aircraft flying at low altitude over the church.

“I was directed by the Area Command to confirm the incident and monitor the aircraft’s activities. I wanted to go out and direct my men to watch out for the aircraft when I received another report of an airplane flying at a very low altitude. I went outside but I couldn’t see it, by that time it had gone.

“I received a call later from Insp. Lucky Ugbaja, stationed at the church that one of the church’s buildings had collapsed.”

According to him, the radio room had earlier radioed the Police Airport Command to confirm whether it was carrying out any activity in the church vicinity.

Mr Haruna said when he arrived at the church’s premises there was a large crowd and the few police officers there were trying to manage the situation.

He said onlookers kept trooping in and the crowd spilled to the roads outside the church, causing serious gridlock.

“We were overwhelmed,” Mr Haruna told the judge, adding that he called for more police officers and were provided.

According to him, the floors of the collapsed building were lying one on the other, “the church members and others at the scene were engaged in rescue operations.

“Those I met there were church worshipers; they were bringing out so many people from under the rubble. Most of the victims were alive. Some were injured, some were not.

The various checks have been conducted both by local and foreign structural engineers. They have the unity of submission that the structure was in perfect condition and was not defective. And now, a top serving police officer whose jurisdiction covered the church has testified before the court, corroborated what Prophet Joshua said of an aircraft whose activities brought down the building.

Today, while we remember the martyrs who died in the tragedy perpetrated by haters of the gospel, we must all offer prayers for the repose of the souls of those who died and the continued strength and fortitude for Prophet T.B. Joshua to continue in his master’s business of propagating the gospel of the Lord Jesus. Yes, like the man in the synagogue said no matter how long a lie is told, truth will prevail. The case against the church should be struck out and if those responsible for the act are not apprehended by state, many faithful take solace with the man of God that the almighty God would serve vengeance of the evildoers.