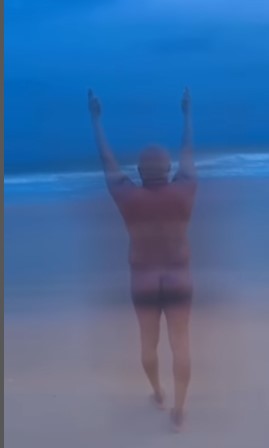 In an interview he attended to address the issue that has brought about controversies, Ebun Olaiya made it known that he was called from his sleep and given an instruction to go straight to be beach to pray for Tinubu.

He explained that whenever he sleeps, he gets revelation about what God has in plan for him, and going naked for Tinubu was one of those things God instructed him to do.

‘’I was asked to stand up and do it spiritually. I have a revelation gift from the All-Powerful God. I occasionally know what God has in store for me before it occurs. The voice said to me, “Please get up, you said you love Asiwaju, and he has been helping you,” as I was sleeping that day. I affirmed.’’

“I did it on purpose because I heard the voice asking me to, and I do not regret it. I will go as far as it takes to support Asiwaju, as long as he thinks this has nothing to do with anyone else,”

It would be recalled that Ebun Olaiya has been in the news for the past four days after he stripped himself naked to pray for Tinubu’s presidential ambition. He received backlashes from Nigerians who feel he should not have gone that far to support a presidential candidate.

I was sleeping and a voice said to me, "you said you love Asiwaju and he has been assisting you?" I said yes. The voice said go and pray for him butt naked on the beach so he can win elections.😉😏😜😅
– Olaiya Igwe explains.

AN ASIDE: my phone's AI suggested all those emojis👆🏽 pic.twitter.com/t6Y2e9v4LG