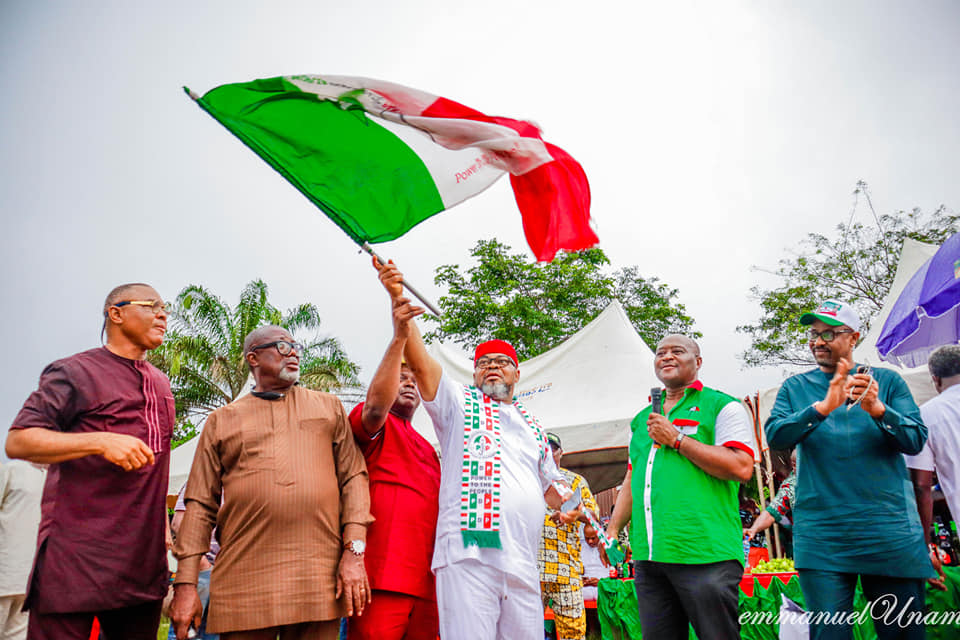 TRIXX NG Reports that In Imo North Okigwe zone, one of the major contenders is the candidate of the PDP, Chief Emmanuel Okewulonu whose name has been on the lips of every imolites since he decided to run in the race for who represents Okigwe Zone in the national assembly.

This publication reliably gathered thatChief Emmanuel Okewulonu has beyond reasonable doubt worked tirelessly in his campaigns, no other candidate has worked like he has done in the last few months, He started working, canvassing for votes, reaching the grassroot since he was elected as the party’s candidate, even after INEC postponed the date for the election, He still continued in his rallies.

Chief Emmanuel Okewulonu isn’t the normal day politician that makes promises and refuses to fulfil them, He isn’t that politician that believes in sugar coating things to win people to his side, rather, He is a politician who keeps to his words.

Before Chief Emmanuel Okewulonu is seen as a politician in Imo state, He is seen as a great philanthropist in the community. Infact, lot of people just have the believe that Him going to represent Okigwe Zone at the senate level will help him to do more for the people, which is totally true.

Without any political appointment or post, Chief Emmanuel Okewulonu has built houses for people, sent youths overseas on business purposes, set up small scale businesses for women in Okigwe Zone, and on every christmas, It’s always a rain of money, rice, cloths, and other essential things for the people courtesy of Chief Emmanuel Okewulonu.

He was a former customs officer who excelled in his career there before moving into the private sector, and during his time there, there was never a time when he was accused of corruption or found wanting of a crime or the other, He is known for fairness, trustworthiness, truthfulness, to mention a few.

In politics today, It’s almost impossible to find someone who fear God truly, but Chief Emmanuel Okewulonu has changed the narrative, infact, the fear of God has made him who he is today, if one fears God, people won’t need to worry about being short-changed, being cheated, being lied to, and that is exactly who chief Emmanuel Okewulonu is.

Most leaders are always hindering their subordinates from doing better than them or even give them opportunities to grow, but Chief Emma Okewulonu isn’t like that, Most of those working for him have big houses, mansions yet, He just has a very portable building in Okigwe Zone, yet, He never stops creating opportunities for his subordinates.

No doubt, Chief Emmanuel Okewulonu has the intelligence, character, attitude, qualities to represent Okigwe Zone, He whom the cap fits, should be allowed to wear it.

Why We Must Appreciate God For 2020 – Speaker Obasa