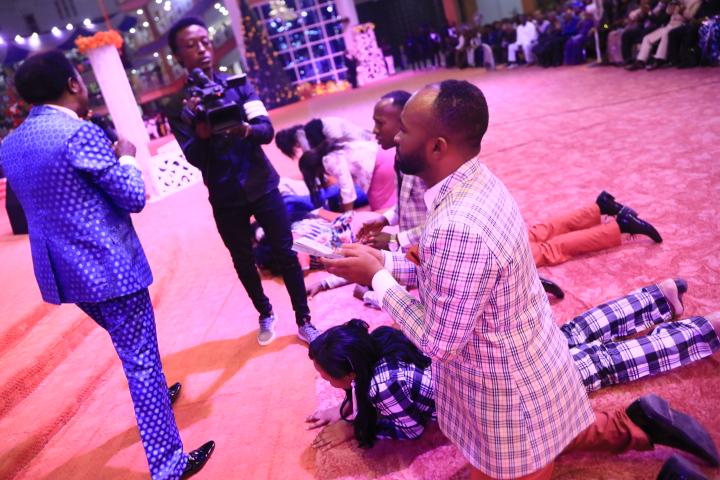 It was glitz and glamour as Prophet Joshua Iginla led champions Royal Assembly celebrated its 12th anniversary amidst pomp and pageantry on Sunday, December 2nd, 2018 inside their 80,000 seater auditorium widely known as City of wonders.

Tagged Majesty to Majesty, it was a touch of majesty when during the service, the Oracle gave out a 4 Bedrooms Duplex worth several Millions, 5 million naira cash and a promise of another edifice in 2019 under construction at Ekiti to his younger brother, Precious Iginla who is also a Pastor and a General Overseer of his own ministry.

Aside that, he dazzled 11 members of his choristers who have release an album each by supporting their dreams with cash gifts worth N5million.

Speaking during the anniversary he declared that he sees many of the guests moving from failure to favour.

Speaking further he enjoined everybody to live in love and let forgiveness be a virtue if they want to make heaven. He said he refused to hold anybody down at heart but has consistently live a life of forgiveness. This he claimed has helped him to love when those who hurts or betrays him because he wants to make heaven.

Arguably a life transforming event as worshippers thronged the programme, the ministry also recorded some notable events such as cutting one of the biggest cakes in the world weighing 50kg.

Exposed! Why Pastor Sunday Adelaja is fighting men of God + All you need to know about his grace to grass story