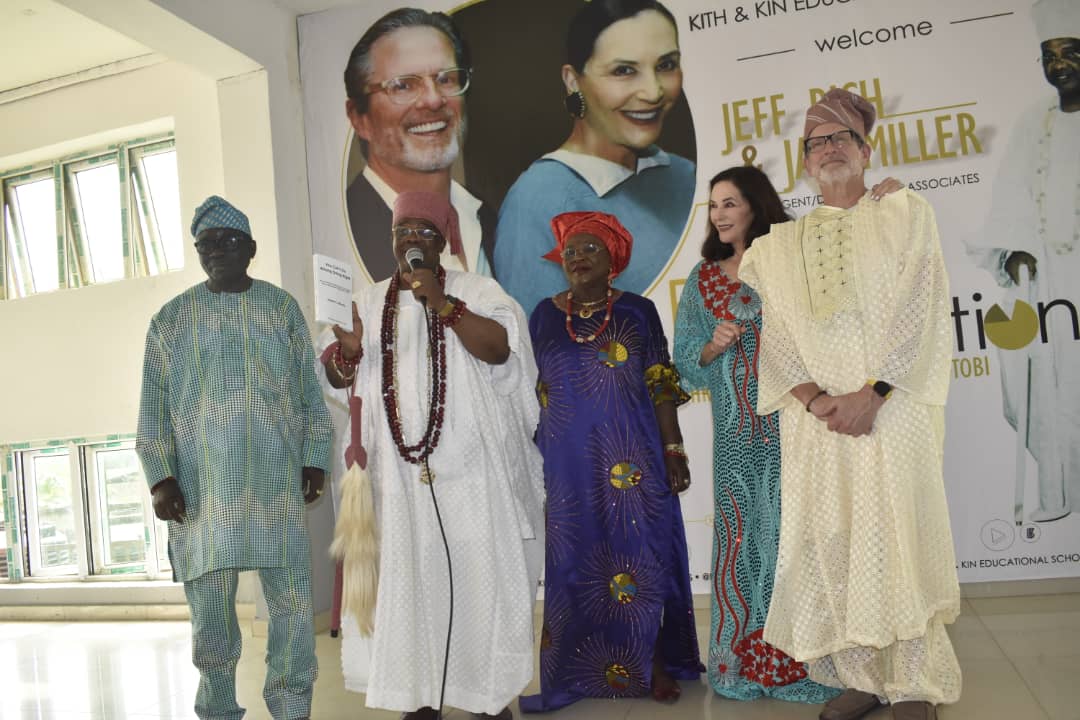 American delegates from the former Special Adviser to American president, Dr. Bob. J.Brown and the Ayangburen of Ikorodu, HRM Oba (Engr.) Kabir Adewale Shotobi, on Monday December 10, 2018, commended the management of Kith and Kin Educational schools, Ikorodu, for offering their students and pupils quality educational and moral services. This commendation came when the pupils and students of the schools displayed the brilliance, moral value, creativity and high intelligence in them before their guests who gathered at the school Excellence Hall for a book presentation to Ayangburen of Ikorodu by the American delegates on behalf 0f the monarch’s god-father, Dr. Robert. J. Brown.

According to a famous American Book publisher who was part of the delegates, Jan Miller, with the wonderful and brilliant performance of both the pupils and students of kith and kin educational schools, Nigerians still has a good future. She described the students and pupils of the school as children that have been well taught which their contributions in future will help them to make a laudable difference in the country in the nearest time. She stated that Nigeria needed, especially young women who can stand up and make a good and desired difference in governance and the only way they can do it is through qualitative education, such as the one being offered by kith and kin. This young American woman who declared openly that she loves Nigeria, revealed that while she was on stage with some of the students and the pupils of the school, during photo session, she had advised them to be hardworking and be determined to make a good change in the country.

In his own commendation, Jan Miller’s husband Jeff Rich, stated, “The school is fantastic, the kids are so full of energy. The staff should be commended because the students were in best uniform, full of passion and excitement as they speak fluently. To me, education is the best and the more people you can educate the better nation you have. As long as you can educate students that way, you don’t have to worry about the future of Nigeria. The students have been taught so well and were confident. It is a good school, a better one for Nigeria”

The Ayangbure of ikorodu, HRM Oba(Engr.) Kabir Adewale Shotobi, revealed that when he got information that his godfather who is the pillar of ikorodu kingdom, Chief (Dr.) Bob Brown’s delegates were coming to present him a book, he decided to have the programme taken place at a classic and unique educational institution, hence, the choice of kith and kin educational schools, Ibeshe, Ikorodu. He said he was not disappointed as the Americans had openly commended the performance of the pupils and students of the schools. “They have found the children being nurtured for a greater tomorrow and said, Yes! Nigeria is going out of the wood, we are marching at the right direction. They appreciated the standard we have been able to raise, that is why they have promised to contribute to the progress of the schools” he added.

Earlier on, a student of kith and kin college, Ogunjemiyo Eniola, had read the welcome address at the book presentation on behalf of her school, while Hausa, calabar, Yoruba cultural presentation and drama by the pupils and students of the educational schools later followed. A pupil of the kith and kin primary school also came out boldly and fluently addressed the Americans, as she described her school as the best in Ikorodu, due to its creativity, educational quality and commitment to moral values for all pupils and students.

As the book titled “You Can’t Go Wrong Doing The Right” written by Dr. Robert. J. Brown, which would be
presented in America in jaunuary,2019; but first brought to Nigeria and particularly to Oba Shotobi, was
presented to the monarch and his Olori, Alhaja Kudirat Shotobi. The pupils of kith and kin, also
presented 2018 year book and another book to their august visitors. Photo session ended the historic
event.