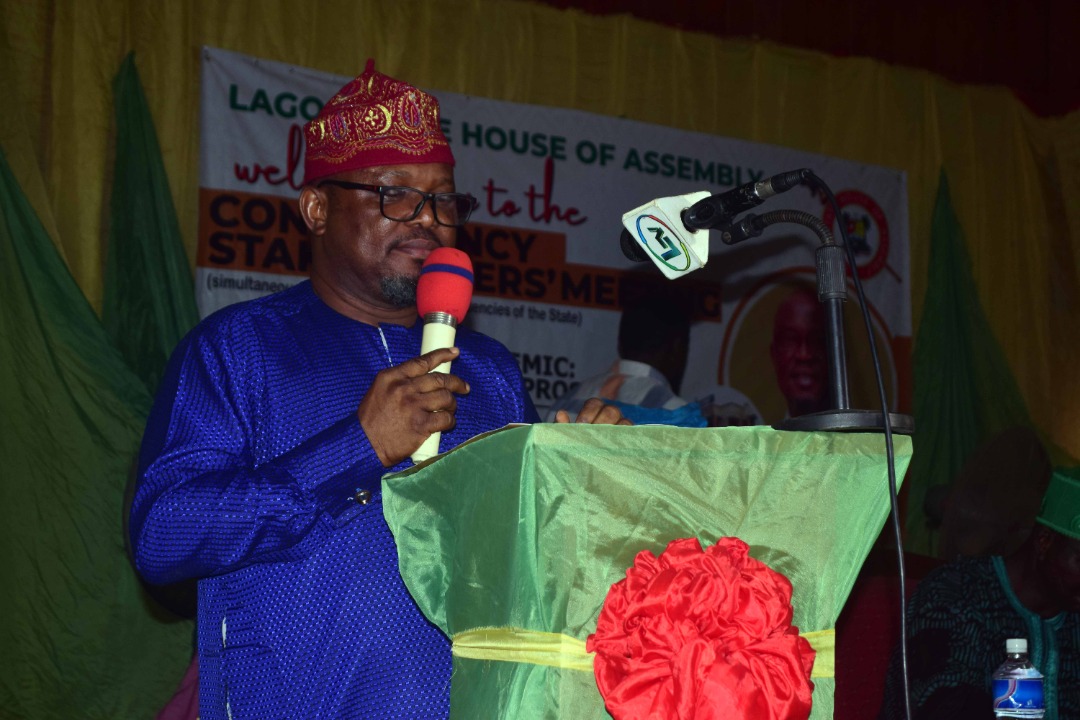 In a bid to listen to the yearnings of his constituents and give account of his stewardship, The Majority leader of Lagos house of assembly and the representative of Ikorodu Constituency 1, Hon SOB Agunbiade has hosted a constituency stakeholders’ meeting in Ikorodu themed ‘Post Covid-19 Pandemic: The Challenges And Prospects’.

During his keynote address, Hon SOB Agunbiade gave account of how the Lagos state government recorded the first Covid-19 case, noting the many giant strides the governor, Mr Babajide Sanwoolu and the house of assembly took in curbing the spread of the novel virus in the state.

‘It would be recalled that on the 27th Of February 2020, the first case of Corona Virus was detected in Lagos state and subsequently, the house on the2nd of march 2020 passed a resolution commending the governor, Mr Babajide Sanwoolu  and his team for their prompt response in addressing the outbreak of the disease in the state.

In its collaborative efforts to stem the tide of the pandemic and bring a new lease of life to Lagosians, the house being the embodiment of the representatives of the people invited, the commissioner for Health, alongside the chairmen and other officials of the local government /local council development areas of brief to assembly on the efforts made so far to combat the pandemic in the state.

The house further approved the sum of N20 Billion Covid-19 intervention fund aimed at containing and managing the spread of the virus in the state as well as mitigate its effects on Lagosians.

The economic headwind generated by the Covid-19 Pandemic also necessitated the approval of the house for the re-ordering of the Y2020 Budget to provide the necessary support for business owners, the vulnerable members of the society and improvement in health care facilities.

To ascertain the level of preparedness of academic institution in the state before the government officially reopened schools in line with guidelines on covid-19 protocols, the Assembly mandated its relevant committees to embark on fact-finding assignments to different schools.

While the government is taking steps to bring life back to normal, we urge every citizen to obey the regulations guiding the containment of Covid-19 in the state in order to free our society of the pandemic which is limiting opportunities in many areas’

He addressed the #EndSARS Protest that occurred in the state, recounting the efforts the Lagos state assembly took in addressing the protesters and how miscreants hijacked the peaceful protest to unleash mayhem in the state.

‘It would be out of place if we fail to mention the recent disastee ttaht struck our beloved state within the last two weeks and the efforts made by the hose to avert same.

On the 8th of October, 2020 at the early state of the protest, the EndSARS Protesters were addressed by the deputy speaker of the house and when they insisted on meeting the speaker, Rt. Hon. (DR) Mudashiru Obasa at about 12 midnight same day addressed the protesters and immediately convened an emergency session to consider their demands. The session was held the following day on Friday, 9th of October 2020 where the house resolved to Call on his excellency, Muhammadu Buhari, GCFR, President of the federal republic of Nigeria to direct the inspector general of police to ( a) Proscribe the special Anti-robbery squad (SARS) and establish a new outfit which will be more efficient with code of conduct and rules of engagement clearly spelt out and  ( b) Ensure that culpable officers of SARS at state and federal levels are punished in accordance with the extant law, call on the commissioner of police , Lagos state command to (i) protect protesters and ensure they are not molested and (ii) stop unwarranted molestation of our youth by operatives of the special anti-robbery squad.

However, it is painful that rather than allow the success achieved by the assembly’s intervention to be fully implemented, some miscreants hijacked the protests and decided to take laws into their hands, unleashing mayhem on the state by destroying the means of livelihood of citizens along with significant number of private and government properties’’

While noting the challenges of the state, He explained that Nigeria and Lagos are faced by three shocks of the pandemic which has in turn made a negative impact on the economy of Lagos state.

‘There is no gainsaying the fact that Nigeria and Lagos state in particular is currently facing three shocks of the pandemic; dwindling oil and tax revenue, contraction in global trade and economic recession. These realities coupled with the recent youth unrest are negatively impacting the economy of the state afloat’’.

Also, Hon. SOB Agunbiade proffered some solutions to the effect of the pandemic on every individuals.

‘Thus, in tackling the socio-economic challenges posed by the pandemic, individuals are encourage to look into the effective management of the various post-pandemic opportunities such as business creation by exploring  e-commerce, adapting to the new ICT Potentials, acquiring relevant skills or education, while government must also invest more in e-governance to facilitate a more efficient and robust governance’

Furthermore, during an interactive session, the several stakeholders present made their yearnings known to Honourable SOB Agunbiade who gave assurance of them being attended to in his capacity as the representative of Ikorodu Constituency 1 and the majority leader of the Lagos State House Of Assembly.