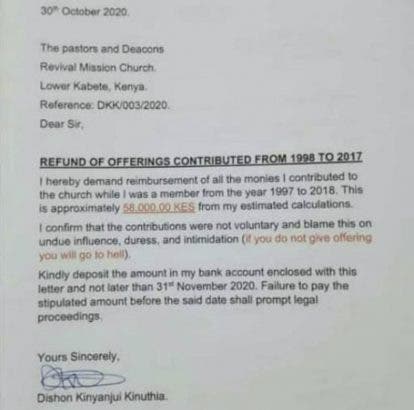 A Kenyan man, writes church to ask for demand a refund of offerings he gave from 1998 to 2017.

The man identified as Dishon Kinyanjui Kinuthia, a Kenyan Christian, took to Twitter to share the letter he wrote to his church while warning that there will be consequences if his money isn’t refunded to him.

He asked the church to deposit the money in his account on or before November 31, 2020, or he will start legal proceedings against them.

He also claimed that he gave the offering under duress, after he was told by the church that anyone who doesn’t give offering will die.

INEC To Resume Voters Registration In 2021