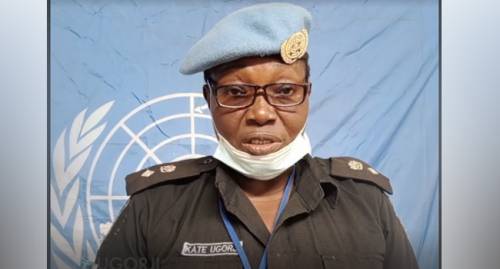 The National Association of Online Security Reporters (NAOSRE) has felicitated with President Muhammadu Buhari, the Inspector General of Police, IGP, the Police Service Commission, PSC, Ministry of Police Affairs, MPA, on the selection of Catherine Ugorji, a Nigerian and Chief Superintendent of Police for an award as the 2020 UN Woman Police Officer of the Year.
Mr Femi Oyewale, National President of NAOSRE on behalf of the association commended the global organisation Under-Secretary General for Peace Operations, Jean-Pierre Lacroix and UN Police Advisor, Luis Carrilho for attesting to the excellent behaviour of the Nigerian trained Police Officer.

Oyewale stressed that despite youths’ dissatisfaction in a unit of the Nigeria Police Force which resulted to the EndSARS protests, Nigerians have something to be proud of.

“This is gratifying, to say the least.
Catherine Ugorji has registered Nigeria’s name in gold in global police space. As an association, we have always believed that with the right tools, officers of the Nigeria Police Force are capable.

“Apparently, she has demonstrated the breadth and depth of women’s contributions to nation building worldwide and underscores the essential role women play in advancing policing.

“This is partly the reason NAOSRE has been unrelenting in giving unbiased media supports to the Nigeria Police Force as a modest contribution to boosting their morale.

“As an association, NAOSRE will be steadfast on the part of truth by apportioning blames when necessary and commending when it is right to do so.
“However, we call on President Buhari, IGP, Police Service Commission and the National Assembly to consider upward review of the Nigeria Police 2021 budget in a manner that it can accommodate most of its essential needs for diligent policing of the country,” Oyewale requested.

She is also among the 21 officers nominated for the award and has been selected by the United Nations as one of the two runners-up for the prestigious UN award.

The UN is expected to announce the winner of the 2020 award before the end of the year.

Ugorji was said to have joined the NPF in 2003 and served as Criminal Investigator from the local to regional level, Child Protection Officer, Divisional Crime Officer up to Acting Deputy Commander of the Ogudu Police Division in Lagos.