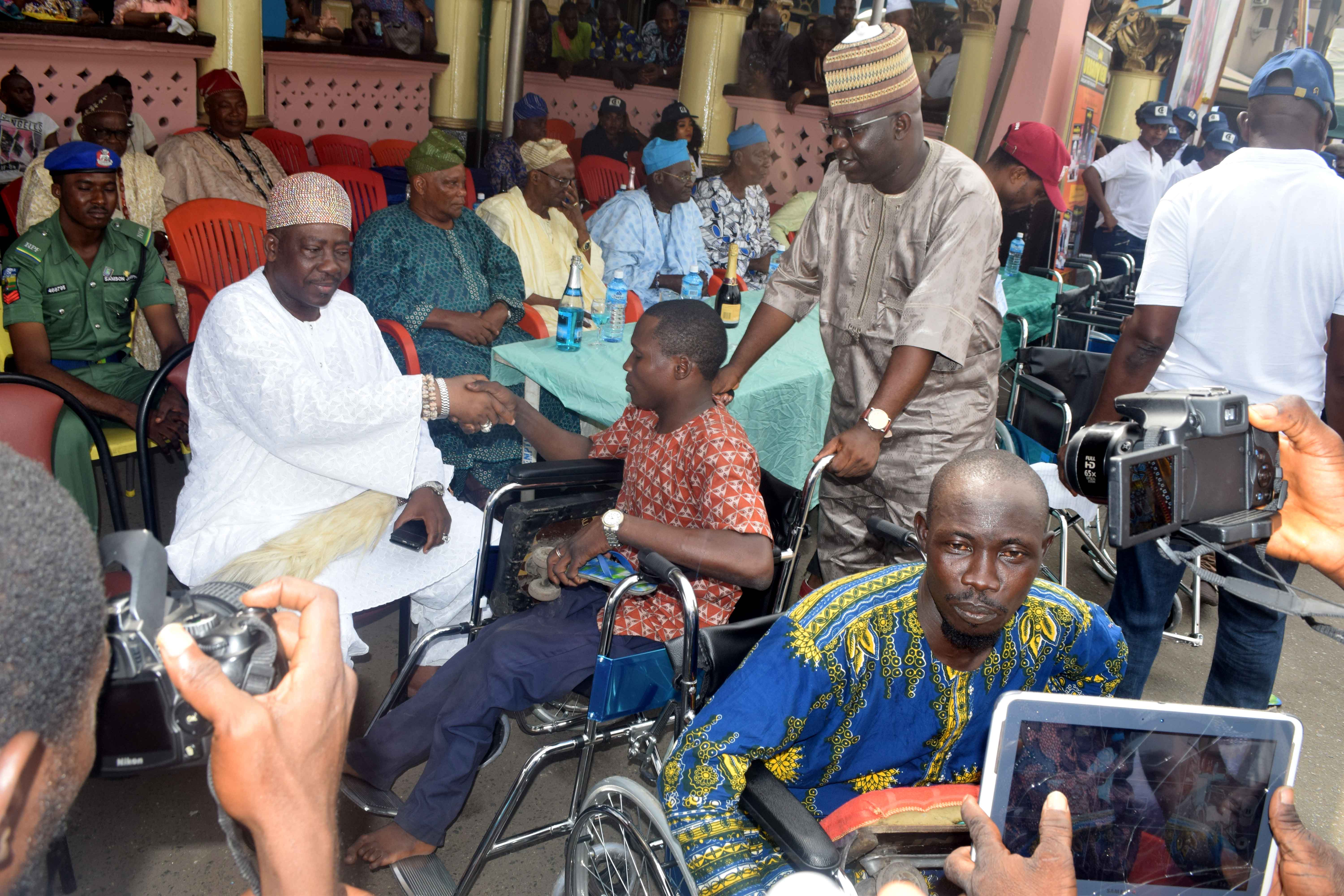 Ijora town was agog On Saturday, December 29, 2018 as the Ojora Of jora land, Oba Abudl Fatai Aremu Oyeyinka Aromire celebrated with the widows, disabled in 9 local governments in Ijora and its environs to celebrate his 66th birthday amidst fun fair.

In a bid to celebrate them, the monarch distributed 15 wheelchairs, 100 coolers, 5 fridges, 7 grinding machines, 6 hair dryers, 7 sewing machines to the disabled, tailors, hair dressers,  and gave rice and Ankara Fabrics to 400 widows, Generators, walking stick, crutches, to mention a few.

It was a moment of revelation which shows the amount of love the people of ijora has for the king and how magnanimous he has proven to be over the years of his reign due to the unprecedented crowd at the event which took place at the king’s palace in Ijora.

According to the people of ijora who spoke at length with TRIXX TV, Oba Abdul-Fatai Aremu has been doing this for over 20 years and it has always been getting better and bigger every year. This is definitely the truth judging by the philanthropic gestures displayed by the monarch.

While speaking to one of the beneficiaries who was given a wheel chair, Shittu Hamzat, he prayed for Kabiesi and revealed that he was surprised by the kind gestures because he has been in need of the wheelchair for over 10 years and despite being a politician, no one remembered him except Oba Abdul-Fatai Aremu Oyeyinka.

In the same vein, a lady who was also given a wheel-chair revealed that its been a long time since she has needed the wheel chair but due to financial constraint, she was  unable to get it.

Furthermore, One of the women who got a grinding machine, Omoware Jimoh in tears explained  that its been 10years since her husband died and things has been hard, but Oba Fatai Aremu has given her a new hope. She equally prayed  that God will reward Kabiesi for remebering her family.

Another woman, Esther Oluwayemisi  who got a sewing machine presented by the Olori Omotolani Adebisi Aromire, Yeyeluwa Of Ijora Kingdom,  made it known that she has been a tailor for so many years but it has been very difficult for her to gather money to buy a machine. But surprisingly, Kabiesi gave her a machine that will feed her for the rest of her life.

It all went to be an emotional moment for everyone as beneficiaries shed tears of Joy and appreciated the King for his kind gestures. However, the king was also presented with a portrait by some of the chiefs.

As the good people of ijora are experiencing era of new dawn in the town and anticipating more developments from a king who sees his people as his major priority. The king will be visiting aged People’s home and Orphanages on Monday 31st Of December, 2018 to give them relief materials after which he will celebrate his birthday On January 1st. Keep your fingers crossed  as TRIXX TV will be bringing all the happenings to you as they unfolds.