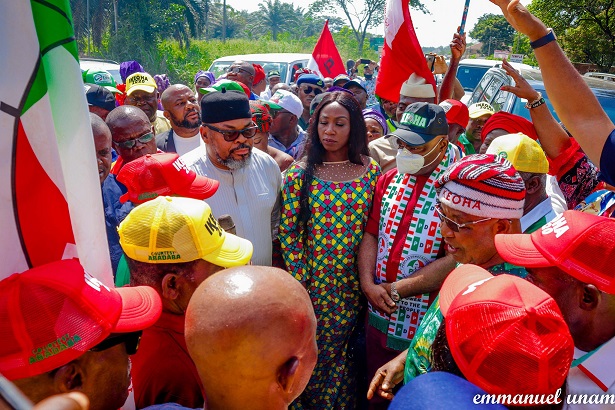 Obowo Local Government Area was in wild jubilation on Wednesday, as it played host to its illustrious son, Chief Emmanuel Okewulonu, the PDP senatorial candidate for the forthcoming bye-election, who begins his campaign rally in the local government.

The first port of call was the palace of the Chairman, Obowo Councill of Traditional Rulers, who is also the Okigwe zonal chairman of Imo State Council of Ndieze, HRH, Eze Goddy Okeke, where all the traditional rulers in Obowo rained down royal blessings on Chief Ikeoha.

Brother to the PDP candidate and former Chief of Staff to Governor Emeka Ihedioha, Chief Barr. Chris Okewulonu, told the traditional rulers that Chief Emmanuel Okewulonu is a man of impeccable character who has the required criteria to navigate Okigwe zone out of the woods.

He said that the candidate needs no introduction in Obowo as his handi work speak for him.

Chief Chris Okewulonu who is a political figure in Obowo and Imo state in general, called for concerted effort to ensure that Chief Emmanuel Okewulonu gets total votes from Obowo.

The revered political leader said that Chief Emmanuel Okewulonu’s ambition cuts across party lines and should be supported irrespective of what party one belongs.

In his remark. The frontline senatorial candidate, Chief Emmanuel Okewulonu, who was in the palace with his lovely wife, Lolo Udochi Okewulonu, said his only reason for contesting the senatorial seat is to liberate Okigwe zone from political contractors who have held the zone down for a long time.

He assured the traditional rulers and indeed the entire people of Okigee zone of his commitment and dedication to move the zone forward to the next positive level through quality representation, if voted to power.

The royal fathers who have earlier spoken glowingly about their illustrious son, circled him and invoked the auction of God upon their son to enable him succeed in his pursuit.

The Okigwe zonal PDP chairman, Sir Chidi Dike, assured the traditional rulers that all local governments in the state have given their approval to Chief Okewulonu.

He urged them to take the lead.

The campaign train further moved to Odenkwume, Alike and Amuzi wards for the rally which was turned to a cannival of sort.

The DG of Ikeoha campaign Organization, Sir Stanley Ekezie thanked Obowo people for the gift of Chief Emmanuel Okewulonu but, reminded them that the show of love they show on him must be translated to massive vote for PDP in the forthcoming bye-election on the 5th of December.