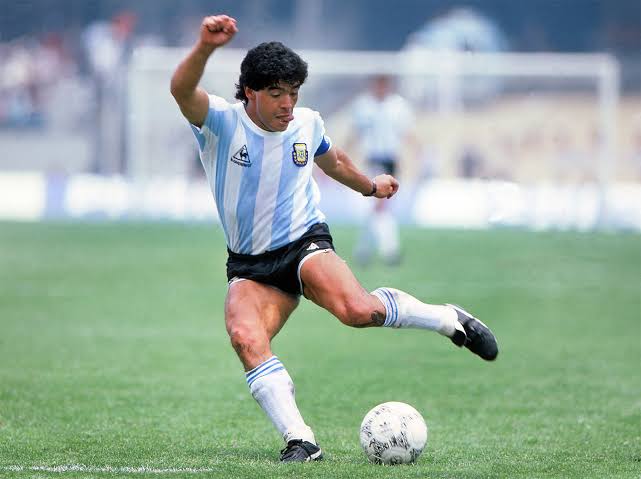 Diego Maradona died from a heart attack on Wednesday at the age of 60.
ByJide Alaka
When Diego Maradona went past six England players in 10 dizzying seconds on June 22, 1986 at the Estadio Azteca in Mexico City, he was cementing his legend forever. FIFA unanimously voted it as the greatest goal in the history of the World Cup. The man, Maradona, a footballer and one who always wore his heart on his sleeve, died of a heart attack Wednesday.

The tweet announcing the passing read: Goodbye, Diego. You will be #Eternal in every heart of the football planet.”

He will be. Diego Armando Maradona was a rare football talent, a god in Argentina, in Naples and anywhere people love the game.

Maradona, according to reports, suffered a heart attack at his home in Argentina on Wednesday, as he convalesced from a surgery to remove a blood clot from his brain.

Arguably the greatest footballer of all time, Maradona was short in stature but he was a giant with a football at his feet, especially that magical left foot. He was so big that for so many years, anyone who wore the No.10 jersey was compared to the great man – a great disservice. In a sport very ego-driven, his was one ego that dwarfed many others. His stature as the greatest may have been tainted with off-the-field misdemeanors, but on the field, Maradona could do no wrong.

For comparison, it is instructive to read and digest what French legend, Michel Platini, said. “What [Zinedine] Zidane could do with a football; Maradona could do with an orange.” There is actually a video of Maradona juggling an orange and former England international, Gareth Barry, said in a television programme, “His [ball] juggling was enough to cover the entrance fee.”

Maradona started his career very early – making his professional bow with Argentinos Juniors, 10 days shy of his 16th birthday. He is still the youngest ever player to play in Argentina’s top football division. At 18, he led Argentina to win the 1979 FIFA World Youth Championship, though he would have loved to have been in the Argentina squad that won the World Cup for the first time in 1978. They left him out of that squad, not on account of ability but because of age.

He made his bow as a petulant wunderkind at the 1982 World Cup, where he was hacked and kicked and reacted by retaliating. By the time the 1986 World Cup arrived, Maradona had made the professional rounds from Barcelona to Napoli and had matured. In Mexico, he put on a show all the gamut of his talent, scoring five times and providing five assists as Argentina went all the way to the title, beating Germany 3-2 in the final. He also scored the famous ‘hand of god’ goal against England in the quarter final, using his hand to put the ball inside the net while attempting a header. The officials did not realise he used his hand and the goal stood. After the match, Maradona said the goal was scored “a little with his head, and a little with the hand of God”.

His second goal of that match was the ‘greatest’ during which he dribbled past six English players to knock England out of the World Cup.

Four years later, diminished physically but still able to pull strings, he committed the discomfiting act of leading Argentina over Italy in the semi-final. His time at Napoli was in jeopardy as many Italians railed at his biting the dog that fed him. He would spend one more season in Naples before transferring to Seville, but he had done enough to see the No.10 jersey retired.

Maradona led Napoli to their first ever Serie A title in 1987, and they won it again in 1990. Maradona also influenced the capture of better players like Careca, the Brazilian striker who was also courted by Real Madrid. In an interview, he revealed his ambition was to play with Maradona, the world’s best player. He also led them to the 1987 Coppa Italia title, the 1989 UEFA Cup, and the Italian Super Cup in 1990.

At the 1994 FIFA World Cup, Nigeria, attending the football fiesta for the first time, was grouped with Maradona’s Argentina. Argentina beat Nigeria 2-1, with one assist from the great man, but he tested positive to Ephedrine after the match. Banned by FIFA, this effectively ended his international career after 18 years of service, during which he won the biggest trophy.

Tributes have been written by some Nigerian players who played in that match. Former captain of the Super Eagles, Sunday Oliseh, went on Twitter and wrote, “Sad day not just for football, but for Mankind as we lose arguably the best player ever to play football. Somehow Diego’s death pains me in a strange kind of way, I can’t seem to understand right now. May his blessed soul Rest in peace #RIPDIEGO.”

In 1994, it took Maradona’s intervention to get over the Eagles’ challenge. First, he engineered a free kick that Peter Rufai blocked, but Claudio Cannigia knocked in the rebound for the equaliser. Some minutes later, Maradona freed Caniggia once again to score the second goal and the winner.

In 2010, at the first World Cup to be held in Africa, Nigeria was again grouped with Argentina, and Maradona was the manager of the eerily similarly talented Lionel Messi. Argentina won 1-0.

In a magnificent tribute, Brazil legend Pele, announced as joint winners of the FIFA Player of the Century award with Maradona in December 2000, wrote, “What sad news. I lost a great friend, and the world lost a legend. There is still much to be said, but for now, may God give strength to family members. One day, I hope we can play ball together in the sky.”

Related Topics:Tribute: Maradona: The ‘hand of God’ and World Cup’s greatest goal
Up Next