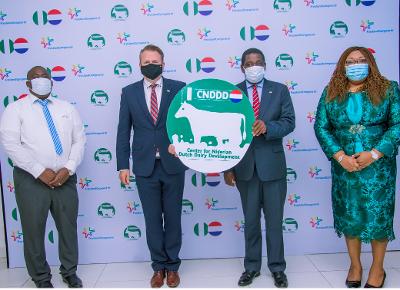 Speaking at the virtual unveiling of the CNDDD Thursday October 15, and represented online by the Minister for Industry, Trade and Investment, Otunba Niyi Adebayo, Osinbajo described the CNDDD launch as an opportunity to improve not only the agricultural sector but the Nigerian economy at large.

He said, “This will among other things, enable us to create employment, diversify the economy, build industrial capacities, encourage competitiveness and improve the management of our foreign exchange reserves to eliminate the economy’s vulnerability to changes in crude oil prices.”

Expressing an interest by the Federal Government to continue to support FrieslandCampina WAMCO’s dairy development strides, the Vice President said further, “Though we have a long way to go, we are heading in the right direction of achieving our goals of increasing the contribution of the manufacturing and agricultural sectors visibly in the future. I look forward to working with the Center for Nigerian Dutch Diary Development as operations commence.”

The Federal Minister of Agriculture and Rural Development, Alhaji Muhammad Sabo Nanono, expressed support and hope in the speedy growth of the dairy sector with the launch of the CNDDD. He said, “with this programme, it appears that we would soon reach the promised land, when we would no more import milk.”

The official launch of the CNDDD, which was themed “Accelerating a Sustainable Dairy Sector in Nigeria”, was attended by the Governor, Central Bank of Nigeria, the governors of Niger, Kebbi, Ogun, Kwara and Oyo states.

The CBN commended the CNDDD initiative while recognizing FrieslandCampina WAMCO as the strategic partner in developing dairy in Nigeria.

Governor of Niger state, Alhaji Abubakar Sani Bello, in his goodwill message said, “I would like to thank FrieslandCampina WAMCO, the Federal Government and everyone that is involved in this programme in making it a success, and I hope this would be for the betterment of Nigeria.”

Governor of Kebbi state, Sen. Abubakar Atiku Bagudu, expressed his joy at the launch of the Center as well as the outcome of the collaborative efforts of FrieslandCampina WAMCO and the  Niger State government towards dairy development. “I believe the CNDDD will be beneficial not only to the dairy farmers but the nation as a whole” he said.

Prince Dapo Abiodun, Governor of Ogun State, in his goodwill message, also commended FrieslandCampina WAMCO for their consistency and product quality ever since their establishment over 60 years ago. He went on to express his reassurance that the CNDDD would be successful.

Governor of Kwara State, Abdul Rahman Abdulrasaq described the CNDDD launch as “a step in the right direction.” He also appreciated the efforts of FrieslandCampina WAMCO and all others behind the initiative.

Governor of Oyo State, Oluwaseyi Makinde represented by Dr. Debo Akande, Executive Adviser to the Governor of Oyo on Agribusiness, expressed his gratitude to FrieslandCampina WAMCO for their support over the years. He added that the “livestock and dairy industry is of importance to our government and economy.” He hopes that the CNDDD will foster the growth of the country’s agricultural sector and enable it become “one of the four pillars of the Nigerian economy.”

The CNDDD logo was officially unveiled by the Honourable Minister, Federal Ministry of Agriculture and Rural Development, Alhaji Muhammad Sabo Nanono. The logo done in the national colours, green and white, symbolised a new era for dairy development as Nigeria and The Netherlands join hands to scale up dairy productivity.