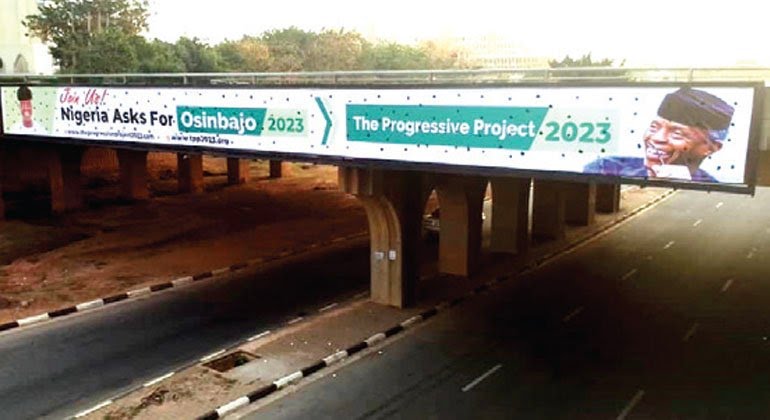 The presidential campaign billboard of the Vice President of Nigeria, Yemi Osinbajo has emerged in the federal capital city, Abuja.

Trixx NG recall Osinbajo had informed President Muhammadu Buhari of his intention to run for president in 2023.

“The Vice-President did not want to go into the election year by hiding a plan which the president had probably already known about,” a national security aide told The Gazette.

The presidential campaign banner which was attached to a bridge in a strategic location in Abuja had the picture of the Vice President.

Osinbajo campaign banner had the inscription, “Join us, Nigeria asks for Osinbajo 2023.”

However, there was no party name and logo on the presidential banner, but the name of a group, ‘The Progressive Project 2023’ was written on it.

This is just as national leader of the All Progressives Congress (APC) Asiwaju Bola Tinubu, is also said to be considering contesting the election.

2023: VP Osinbajo Reportedly Tells Buhari He Wants To Be President Despite Tinubu’s Ambition