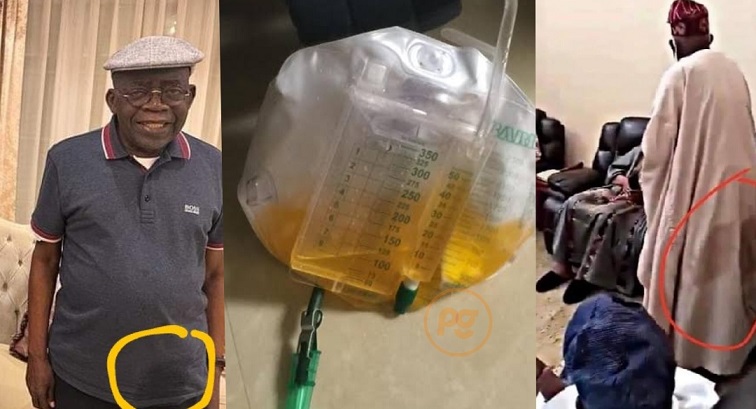 A new photograph of Bola Tinubu, presidential candidate of the ruling All Progressives Congress (APC), has emerged, where he wore an inner device believed to be a ‘catheter bag’ to expel urine, further raising questions about his frail health status, ahead of the 2023 general election.

A catheter is a device that collects urine into a drainage bag through an attached tube. It is typically used by people who cannot naturally pass urine.

The photo was released on Thursday afternoon by Mr Tinubu’s media aide Joe Igbokwe in a desperate attempt to douse concerns over his recent trip to London, including his absence at today’s peace accord signing in Abuja.

Atiku Abubakar of the Peoples Democratic Party (PDP) and Peter Obi of the Labour Party (LP) were present at the event, where Mr Tinubu was represented by his running-mate Kashim Shettima.

The picture circulated on social media as a ‘proof of life’ showed Mr Tinubu meeting with the former interim chairman of the APC, Bisi Akande, and Najatu Muhammadu, a female chieftain of the party.

The Gazette gathered that the APC candidate had traveled to the United Kingdom, last weekend, a few days before the APC released the 422- member presidential campaign council (PCC) of the party.

His sudden trip has also fuelled speculations of another medical trip even as he claimed ‘fitted’ for marathon campaigns for the next year’s election.

Four medical doctors, including two surgeons, informed The Gazette that the outline of the “urinary bag” was apparent in Mr Tinubu’s photo.

Since he joined the 2023 presidential race, Mr Tinubu’s ailment has been generating concerns among Nigerians, especially critics of his personality, who have queried his suitability to succeed incumbent President Muhammadu Buhari next year.

In February, The Gazette published a video of Mr Tinubu’s visit to the palace of Awujale of Ijebuland in Ijebu Ode that revealed how his flowing garment was soaked from behind when he stood up to address visitors at the palace. One of his security aides could be seen frantically covering his nose in the video.

The footage elicited criticism from Nigerians, with many saying it suggested that the APC presidential candidate was suffering from urinary incontinence.

Aside from his health status, Mr Tinubu had consistently made slurred and incoherent comments at public functions.

The former Lagos governor has, however, emphasised that it is “unnecessary” for him to be physically fit to rule Nigeria, stressing that he was seeking to be president becausee he has the necessary mental alertness to govern a diverse and developing nation like Nigeria.

“If you hear them saying, can I do it? I am not applying for the job of a grave digger; not race running, I am not a horse. I am not applying for bricklaying. I went to school to study accountancy and management. I am applying for a job of the brain; intelligent thinking; it is a job for someone who is ready to do things right,” Mr Tinubu had said when he visited the palace of the Ooni of Ife and Owa Obokun of Ijesaland, in Osun.

Spokespeople for Mr Tinubu’s campaign did not return requests seeking comments about the protruding object under their principal’s clothes in London.