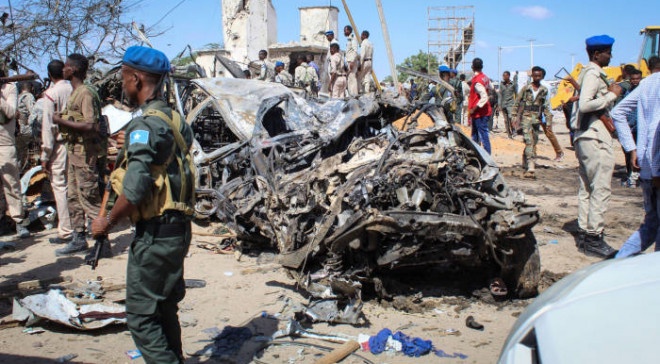 At least 17 people were killed in two separate incidents within Somalia as the country anxiously waited for maritime border dispute judgment by the International Court of Justice [ICJ] at The Hague, in which Somalia emerged victoriously.

In the first incident, according to Al-Shabaab at least 12 security officers were killed in Deynile district, north of Mogadishu after an explosion hit their vehicle, also leading to multiple injuries. The officers, reports indicate, were on regular patrols of the area at the time of the incident.

Those killed are mainly from the Somali National Intelligence and Security Agency [NISA], which is trying to expand operations within the country after Al-Shabaab intensified attacks.

The bombing comes amid uncertainty over the future of African Union Mission Forces [AMISOM]. There are questions whether AMISOM should be reconfigured or form a joint mission with the UN.

There are ongoing military operations in Lower Shabelle, a major Al-Shabaab stronghold but the union forces have often tried to liberate several strategic towns from the militants. Through their affiliate media websites, the Al-Shabaab militants claimed responsibility for the attack.

Meanwhile, a suicide bomber killed five civilians and injured 6 in a teashop in Mogadishu. The incident took place at Fagah intersection in Mogadishu shortly after the ICJ decision came out, reports indicate.

While it’s not clear if the matter is related to the ICJ judgment, Al-Shabaab militants who claimed responsibility, have previously accused Kenya of “grabbing” the Indian Ocean coastline and even threatened to attack authorities in Kenya.

The militants have been waging attacks against security forces, senior government officials, and at times innocent civilians. It’s the security forces both foreign and SNA who have borne the brunt of Al-Shabaab attacks in Somalia and across the border.

The two attacks come at the time Somalia rejected a proposal by the African Union Peace Committee to have a hybrid mission activated in Somalia. Under the arrangement, the mission between the UN and AU would see the deployment of more troops to Somalia.

Instead, Mogadishu wants the African Union to rescind the proposal and focus on the full implementation of the Somali Transition Plan [STP]. Once implemented, the plan would see Somali National Army take over security responsibilities in the country by 2023.