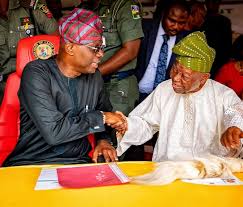 News making rounds has it that the first civilian governor of Lagos state , Lateef Jakande Is Dead.

The Governor of Lagos state, Babajide Sanwoolu confirmed it in a tweet while writing a short tribute about him.

Jakande, a former journalist became governor of Lagos State in Nigeria from 1979 to 1983, and later was Minister of Works under the Sani Abacha military regime.

His administration as governor of Lagos state is still revered for the massive infrastructural development recorded during his four-year stint especially the numerous Jakande Estates built across many local governments in the State as well as sterling investment in schools.