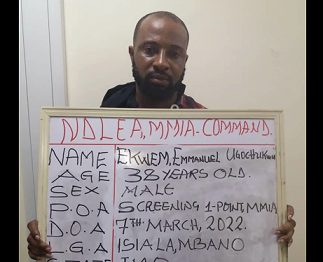 A popular Nigerian Pastor has been arrested with 54 sticks of hard drugs at the Murtala Mohammed Airport in Lagos.

The General Overseer of Christ Living Hope Church, Rev. Ugochukwu Emmanuel Ekwem was captured by eagle-eyed NDLEA operatives on his way to a three-week crusade in Nairobi, Kenya, with 54 sticks of drugs wrapped around his body.

The Preacher has his church headquarters in Isuaniocha, Mgbakwu road, Awka, Anambra state and two other branches in Lagos and Abuja.

He was arrested on Monday 7th March, during the outward clearance of passengers on Ethiopian Airlines flight to Nairobi via Addis Ababa.

When tested, the 54 sticks proved positive to cannabis. The clergyman confessed during preliminary interview that he packed that quantity of illicit substance on his body to use during his three weeks crusade in Kenya.

POLITICS NIGERIA gathered that Ekwem will be subsequently charged to court to answer for his crimes.

Vice President Yemi Osinbajo Opens Up On Having Issues With Buhari