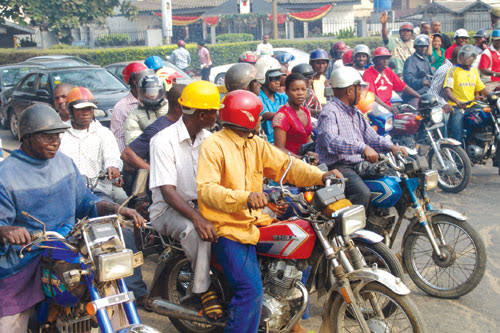 Policemen and their family members fled their Division A barrack residence in Akure following attempts by commercial motorcyclists popularly known as Okada riders to attack the place.

Trixx NG learnt the Okada riders broke into the gate and threw stones into the building while policemen and their families fled through the back gate.

Some policemen scaled the fence and ran away while others struggled to take their vehicles away from the barracks.

Bonfires were set in front of the A Division as the Okada riders demanded to see the policeman who shot one of their colleague dead.

It was gathered that a driver had knocked down and killed one Okada rider and a cocoa merchant at Arakale area of Akure.

Both men died on the spot, sparking a protest by Okada riders.

A policeman reportedly attached to a filling station in the area was said to have fired shots in the air to scare the protesters away but one of the shot hit and killed an Okada rider.

The policeman reportedly fled to the A Division for refuge and was pursued by the Okada riders.

One of the protesters said they want the killer policeman released to them.

“We want to see the policeman. He is inside this A Division. A government car killed two persons at Arakale area and a policeman was shooting into the air and killed another bike man. We are angry,” he stressed.

Gunshots fired by the police angered the Okada riders who hauled stones and other objects into the building.

An eyewitness said many policemen scaled the fence and ran away.

Ondo Police spokesman, DSP Fumilayo Odunlami, said she was yet to be briefed about the incident.