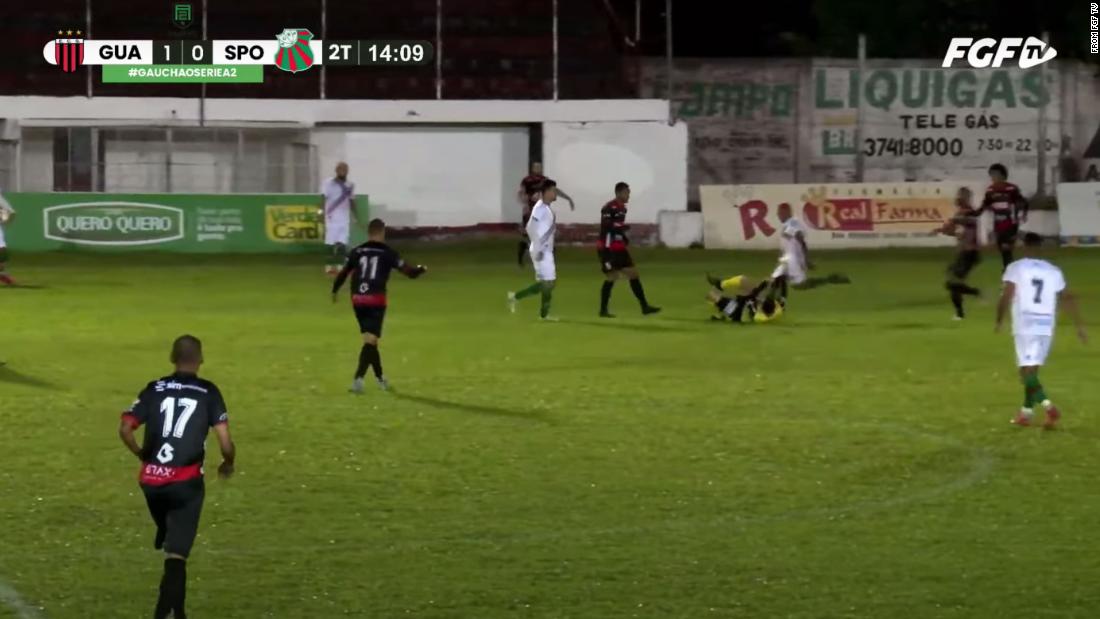 A Brazilian footballer, William Ribeiro is facing a charge of attempted murder after kicking a referee in the head and knocking him unconscious.

Ribeiro was arrested after attacking referee Rodrigo Crivellaro in the head during a match on Monday in Venancio Aires, in Brazil´s southern Rio Grande do Sul state.

In a phone interview with CNN, Vinicius de Lourenco de Assuncao, who is the police chief of Venancio Aires and made the preventive detention of William Ribeiro, said the footballer had been released from jail on Tuesday.

The match between Sport Club Sao Paulo and Guarani-RS was in the Rio Grande do Sul state’s second tier.

Ribeiro, who was playing for Sport Club Sao Paulo, attacked Crivellaro at the beginning of the second half.

Referee Crivellaro left the stadium unconscious in an ambulance and was taken to a hospital. After some examinations and observation, he was discharged on Tuesday.

“I don’t really remember (what happened). My refereeing colleagues told me that I gave him a yellow card. He punched me in the face, I fell to the ground, got kicked, and passed out,” Crivellaro told a local radio station.

“This player needs treatment because he is totally out of control. He deserves to be arrested for a long time.”

Rio Grande do Sul state released a statement on Monday saying it had opened an investigation into the incident, while Sport Club Sao Paulo said that its “deeply ashamed” of the aggression and that Ribeiro´s contract had been ended.

“The aggressor athlete’s contract is summarily terminated. Furthermore, all possible and legal measures in relation to the fact will be taken,” wrote the team in an official note.

No lawyer appeared to defend Ribeiro, according to Assuncao, and the case is now with state public defender.

Ribeiro has yet to publicly comment on his social media or in Brazilian media outlets.

Sex For Job: Ex-NIPOST Staff Dies During Sex Romp With 2 Female In Uyo