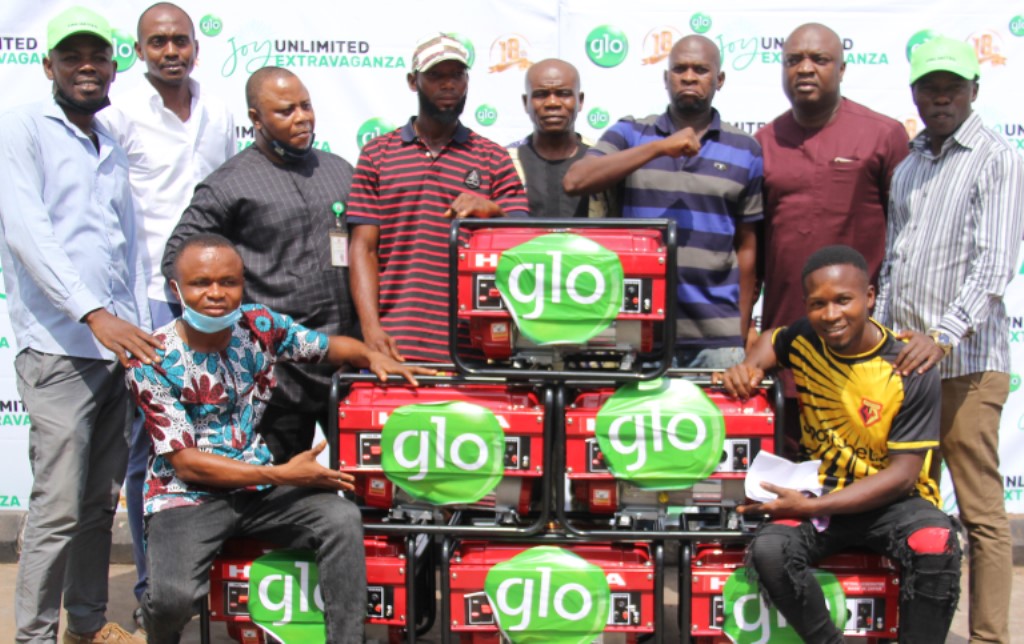 The winners in Globacom’s Joy Unlimited Extravaganza promotion who were presented their prizes in Enugu on Thursday said the national telecommunications company has made the forthcoming Christmas a memorable one for them.

One of the overjoyed generator winners and self-employed man, Patrick Ogwuazor, from Enugu, declared that it was the best thing to happen to him in recent times. “The news brightened my mood after a hard day’s job. I had been planning to buy a generator and now Glo has made my Christmas complete. I am assured of enjoying my celebration with constant power supply”.

Augustine Afoso, an Enugu-based builder who won a TV set, stated that he was extremely happy with Globacom for coming to his aid. “My dad had told me to buy a new TV for him as his Christmas present. I had been wondering how to raise the money for it and now God has used Glo to answer my prayers. This means a lot to me”.

Similarly, Francis Ejiofor, who works with the National Gallery of Arts in Enugu and is a refrigerator winner, said, Glo has brought joy to him and his family: “What a beautiful way to start Christmas. I am overwhelmed with happiness and I thank Glo for what they have done for me today”.

Mabel Ogbuinya, a Nsukka-based businesswoman, also expressed gratitude to Globacom after receiving her refrigerator. “This is a perfect Christmas gift for me, it will be very useful at home. Thank you, Glo.”

Last week in Lagos, over 200 winners who emerged from the first draw of the promotion received their prizes. Globacom said the promo was launched to give subscribers the opportunity to win mouth-watering prizes including 5 brand new Kia cars to be won every month, as well as 100 appliances, including television sets, fridges, and generators, to be won every week, in addition to 5,000 freebies to be won in the daily draws.

For subscribers to be eligible to win in the promo, they will be required to make a total recharge of N500 in a week (that is Monday to Sunday) to qualify for the weekly draws, while a total recharge of N2, 000 in a calendar month qualifies a subscriber for the monthly draws to win any of the car prizes. Customers can participate in the promo by dialing *611# on the Glo network, Ehumadu explained.