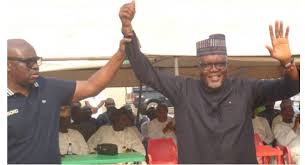 The Chairman of the Ekiti State PDP Gubernatorial Primary, Governor Udom Emmanuel of Akwa-Ibom State announced Kolawole as winner with a total poll of 671 votes to defeat former governor of the state Segun Oni, who scored 330 votes, to come second.

The PDP primary election was held at the Great Eagle Event Centre amidst tight security provided by men and officers of the Nigeria Police, Nigeria Security and Civil Defence Corps (NSCDC) and the Department of State Service (DSS).

Trixx NG had earlier reported that the Senator representing Ekiti South in the National Assembly, Biodun Olujimi had pulled out of the PDP primary election.

The lawmaker on Wednesday said she feels unwanted and disenfranchised, hence her decision to disqualify herself from the race.