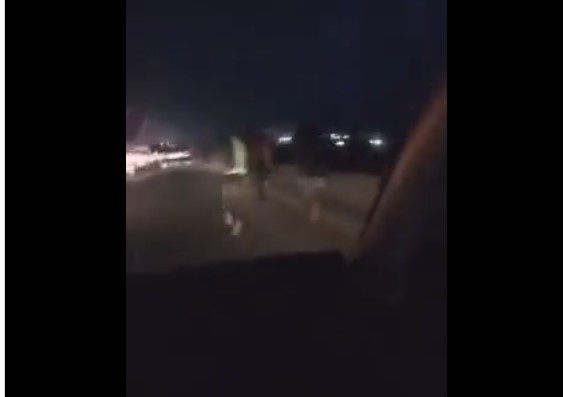 There was apprehension on Long Bridge, inward Lagos State, opposite Mikano/Karameh City, along Lagos/Ibadan Expressway, at about 5.55a.m., on Wednesday. Four gun-wielding men in black had taken advantage of the traffic jam and started robbing motorists.

However, some brave passengers and motorist disrupted their operations by pelting them with pebbles.

Narrating his experience to Vanguard, a passenger said he was in a Mazda car that took off from Mowe, Ogun State.

According to Owokunle, seven passengers were on board the Mazda car, when the armed men were sighted in black cardigans, robbing unsuspecting road users.

He said: “The journey was very smooth from Mowe, but as we approached the Long Bridge, the driver was advised to be alert because of the perennial gridlock ahead.

“Shortly after, the driver sighted the suspects on the bridge stopping and robbing road users.

“People were scared and many drivers and passengers abandoned their vehicles and fled in different directions.”

He continued: “Fortunately, one of the road users shouted at the top of his voice, advising co-road users to stop running and to face the suspects.

“This was how the road users pelted the suspects with stones, while some drivers brought out cutlasses and rods to face the suspects.

“Sensing danger, the suspects descended the bridge and disappeared.”

Another road user, who simply gave his name as Gabriel, corroborated Owokunle, saying two car owners were robbed in his presence before the road users began a counter attack.

“This angered us and we faced the suspects with pebbles, cutlasses and rods,” he added.

Another road user, Aramide, said out of fear someone jumped from the bridge and this may lead to serious injuries.

“But nobody could wait to attend to him as people continued their journey after the nasty experience,” he said.

Hot spots on the expressway

Meanwhile,earlier, the newly-promoted spokesperson of Lagos State Police Command, SP Abimbola Oyeyemi, said that policemen have been detailed to some sensitive areas of the expressway to curtail suspicious activities.

He was reacting to an alarm by one Pastor Olaleye Gbenga of The Redeemed Christian Church, RCCG, claiming that some 20 persons were kidnapped on the Kara Bridge, along Lagos/Ibadan Expressway.

Lately, many motorists and commuters have lamented being trapped in the traffic induced by the ongoing road construction on the expressway, particularly around the Otedola Bridge, Kara and Long Bridge.

Motorists and commuters, while lamenting over the situation, were heard complaining that the road had become narrow due to the construction, and had slowed down vehicular movements.

The situation, however, worsened as robbers take advantage of the traffic to rob.

Some road users told Vanguard there was urgent need for government to beef up security on the expressway.