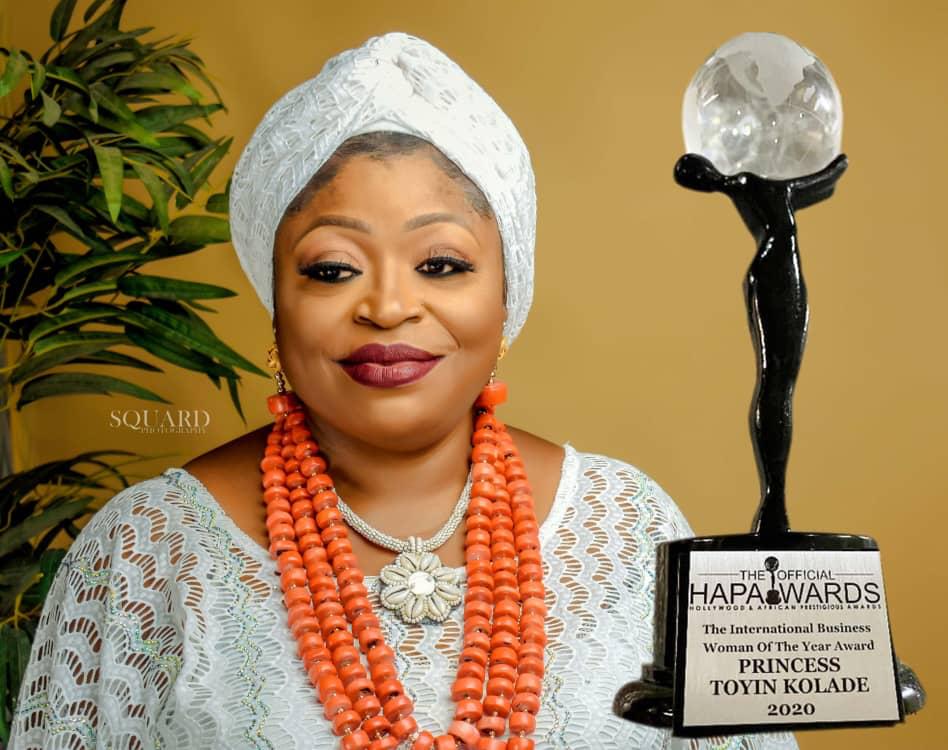 Eminent Nigerians including Governor Yahaya Bello of Kogi State and former governor of Ogun state, Senator Ibikunle Amosun across have sent felicitations to the business mogul, Princess (Dr.) Toyin Kolade, ahead of her installation as the Iyalaje of Oduduwa Race worldwide (Iyalaje Oodua) by the Arole Oduduwa Olofin Adimula Ooni Adeyeye Enitan Ogunwusi Ojaja II, the Ooni of Ife.

In a statement on Wednesday by his Director of Media & Public Affairs, Comrade Moses Olafare who doubles as Secretary of the Installation Planning Committee, Ooni Adeyeye Enitan Ogunwusi had earlier three months ago announced the selection of Princess Kolade as the Iyalaje Oodua who will be officially installed on Saturday July 17th, 2021 at the Ile Oodua Palace of The Ooni of Ife in Ile-Ife.

In their separate congratulatory letters, the personalities who described Princess Kolade’s appointment as the insertion of the right peg in the right hole, lauded the Ooni over such excellent appointment.

Felicitating with the celebrant, Kogi State Governor, Alhaji Yahaya Bello, in statement signed by the Secretary to the State Government, Dr. (Mrs.) Folasade Arike Ayoade, described Iyalaje Toyin Kolade as an inspiration to the Yoruba People, to the larger Oduduwa Race globally and Nigeria as a country.

“Iyalaje Oodua, the Administration of His Excellency, Alhaji Yahaya Bello is proud of you. We want to use this medium to wish you may more years of peaceful reign and greater heights. I pray that God Almighty will grant you a robust health, wisdom and grace needed to meet up with the demands of this exalted title.”

In the same vein, the immediate-past Governor of Ogun State, Senator Ibikunle Amosun, described Princess Kolade as a repecter of the prestigious traditional institution.

“This is a well deserved chieftaincy title considering the many positive impact you have made in business, community service and in other spheres of human endeavors. “Let me also add that your contributions to the propagation of the culture and tradlition of Yorubaland, particularly through the annual Aje Festival Celebrations in lle-Ife under your coordination, have been exemplary.” Amosun said.

Just like her husband, former First Lady of Ogun State, Chief (Mrs.) Olufunso Amosun in her words said, “This chiettaincy title is yet another feather to your already adorned cap. You have been a worthy ambassador of the womenfolk – always exhibiting zeal, passion and selflessness about the development of our society and humanity in general.

“Your nomination for this exalted title of lyalaje Oodua (worldwide) is a well deserved honour which epitomises the many giant strides you have recorded in business and in other spheres of human endeavours. The annual Aje Festival Celebrations in Ile-lfe which you have been coordinating speaks volumes about your contributions to the propagation of the culture and tradition of Yorubaland.” Mrs Amosu said.

A leading commercial in Nigeria, Zenith Bank, Association of Nigerian Licensed Customs Agents (ANLCA) and Occupation Safety And Health Association equally were among the institutions to currently rejoicing with Princess Kolade.

Meanwhile, Chairman of the Iyalaje Oodua installation commitee and Atayero of Aramoko Kingdom, HRH Amb. Olusegun Aderemi has announced rites lined up for the history-making event which begins on Thursday.

According to the committee chairman, Iyalaje Oodua will be received at Ilero spot at Iremo road, Ile-Ife by the cultural women (Obinrin Ilero) and the Ooni’s traditional aides (Emeses) to perform the ILERO rites who will lead her to the palace (Ile Oodua) to pay traditional oobeisance to the Arole Oodua before taken to the sacred Yeyemolu well for blessings.

She will afterwards return to Ilero spot (Iremo) where to be received by the Chief priests (Isoros) of Ilero for further rites.

Saturday 17th July 2021 will start with the movement of Isoros and Iyalajes of different markets to the AJE temple at Oja Ife (Oja Ejigbomekun), where the Iyalaje would join them in company of Emeses, seven horses and her guests.

She’ll then be dressed traditionally as the Iyalaje Oodua and be prayed for to be able to discharge optimally in the lofty capacity.

Afterwards, she’ll be led to the palace by the Isoros and Emeses in company of her guests. She’ll be received at the palace’s entrance (Enugeru) by Ife High-Chiefs who will then take her to the Temple of Wisdom (Ogun Laadin) within the palace courtyard for blessings.

At the Temple of Wisdom, she will get the installation leaves (Ewe Akoko). She’ll then be taken to the, where she’ll be received by the Ooni who would announce her as the Iyalaje Oodua and continue with other phases of the installation.

The grand reception and other social aspects of the installation ceremony will later hold the OJAJA ARENA, a 3,000 seater MICE Centre located within the premises of the Ife Grand Resort and Industrial Park, Ife/Ibadan Road, Ile-Ife due to be officially commissioned on Friday.

Sad! Musician, Kizz Daniel Loses One Out Of His Set Of Triplets