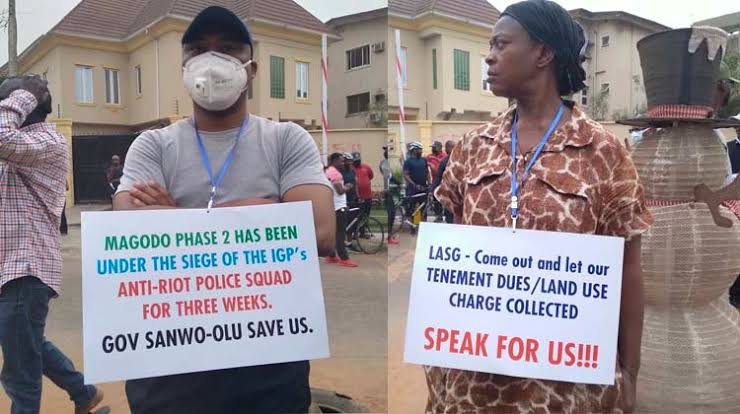 Residents of Magodo have taken to the streets again to protest the militarisation of the estate with at least 50 armed-to-the teeth policemen.

Recall policemen were said to have recently accompanied suspected land grabbers and members of a family who invaded the estate with bulldozers.

It was learnt that it took the intervention of the Governor, Babajide Sanwo-Olu before the gates were reopened as the Inspector-General of Police, Baba Usman, promised to withdraw the policemen.

The chairman of Magodo Residents Association Banjo Osinubi told journalists during the protest that the presence of armed cops was unacceptable.

“We called our people out to protest this morning. Over 50 policemen are living within the estate. We want the police out of our estate,” stated the Magodo resident association chairman. “There are no cases of kidnapping, rioting, but why are they still here? We want them out of our estate.”

Two gates leading to the estate were shut as placards-carrying residents continued their demonstration.

“Gov Sanwo-Olu, stop the illegal possession of Magodo phase 2 properties which were legally bought from LASG,” said a placard.

Another placard urged, “Lagos Attorney-General prosecutes those involved in the illegal invasion of Magodo Phase 2 you promised,” with yet another one stating, “Magodo Phase 2 has been under siege of the IGP’s anti-riot police squad for three weeks.”