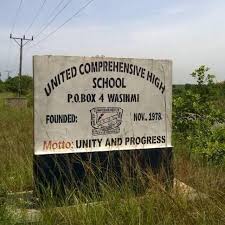 TRIXX NG reports that Pupils of United Comprehensive High School, Wasimi in Ewekoro Local Government Area of Ogun State on Thursday morning, blocked the Lagos-Abeokuta Expressway to protest against the alleged killing of their colleague

This publication gathered that they trooped out in large numbers to block the highway.

It was learnt that an unidentified pupil of the school was reportedly killed while crossing the road.

A source who spoke with our correspondent on Thursday said motorists plying the road were not allowed to go about their businesses.

The development made the travellers both from Lagos and Abeokuta stranded for hours.

A source who works around the area said, “It was the students of United Comprehensive High school that were turning vehicles back and did not allow vehicles to ply the road.”

Lagosians Dump Cars, Run For Their Lives As NURTW Clash Gets Tougher In Obalende