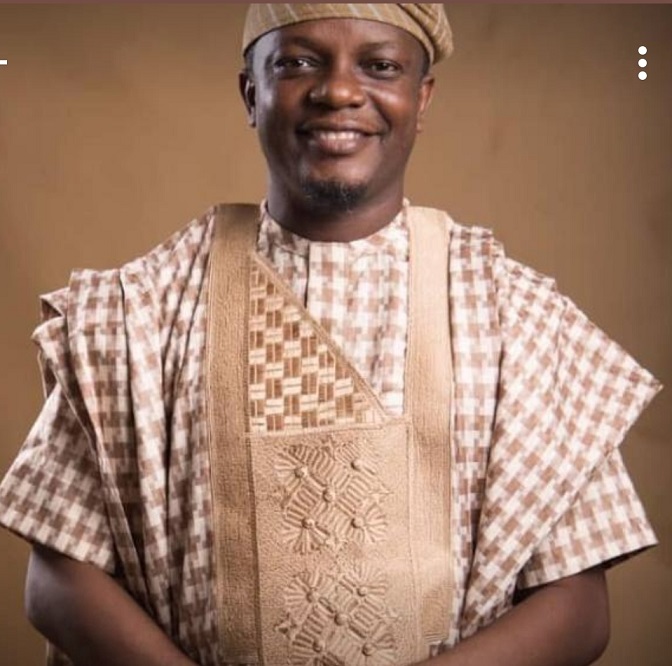 Little did the Baale of Itomi Island (Tom Island) in Lagos, Chief Dapo Oluwaseun Oshin, knew that the stage he stood on that Friday night of July 16, 2021, would be the last time he would be displaying his dexterity as the a professional Master of Ceremony and broadcaster of over 19 years, when he joined the late Alade Aromire at Yotomi Television as programme producer and presenter in 2002.

According to his wife, Olori Lolade Oshin, when she spoke with Freelanews in an interview, she said when she noticed that he was having difficulty using the right hand side of his body when he sat down to eat after the event, which took place at Classic Event Centre, Oregun in Lagos after it ended at about 5pm, she raised alarm.

Chief Oshin was a man a young traditional head with dreams of ensuring that the small community he led had the best of what the larger society in the world could offer. During a chat with Victor Ojelabi, the publisher of Freelanews, long before his demise, Baale Oshin enlisted several notable indigenes of his community and how he had mapped out ways of enticing them to establish businesses in order to tackle unemployment among his people and also jump start speedy development of the area.

“By the time these plans kick off, you would be amazed at how much we can achieve for this community and even you, who is not an indigene, would always see our community as a desired gate-away from your busy activities,” Baale Oshin once said enthusiastically.

He wouldn’t see that dream fulfilled. He would be dead in a few months doing what he knew best and giving to the world of entertainment and media a lasting taste of what broadcasting should be.

He grew up in Agege in Lagos State where he had his elementary school education in the ‘80s into ‘90s at Ibido Primary School. He attended Vetland Grammar School, Agege between 1984 to 1990 before he proceeded to Moshood Abiola Polytechnic, Ojere in Abeokuta, Ogun State in 1995 through 1998 for his Ordinary National Diploma (OND) and capped it up at Yaba College of Technology (Yabatech) for his Higher National Diploma between 1998 and 2000.

The world lost an upwardly progressing talent at exactly 2:15am on Saturday, July 17, 2021 when he breathed his last.

“Within minutes his blood pressure had risen and was seriously sweating. He was rushed out of the event centre at about 6:00pm to the hospital but we realised there was no road as everywhere was blocked due to heavy traffic in Ikeja that night.

“I kept calling for help as I saw my husband slipping away from me, which attracted a female doctor at the event to prescribe aspirin. Someone was sent to get the medicine and still came back empty handed after two hours!” the distraught wife narrated.

However, they had to look for an exit into Ikeja City Mall in order to purchase the medicine from a pharmacy in the mall because of the heavy traffic which prevented them from getting to the hospital on time.

“I bought the medicine and fed him. He stabilised and we returned to the venue to wait for the traffic jam to subside. But when the hold up wasnt abating and I started raising alarm again because I knew that my husband was still not okay.”

Immediately they made a move again to the hospital when they were informed that there was a clinic within Alausa.

“On getting to Bodet Medical and Maternity Centre, my husband was given first aid and he stabilised.

“But the the doctor informed me he couldn’t manage him and suggested we took him to Lagos State University Teaching Hospital (LASUTH),” she told Freelanews.

According to a family member, it was useless calling Lagos State Ambulance Service because the respondents gave excuses why they couldn’t come.

“We called ambulance service through its short code 767 severally but no help. One respondent said he would see what he could do but no response after that. When I called again and informed them we have stabilised him but only needed their help to get him to the hospital because of the traffic, I was informed that he was trying to get his team and would relay the message to them. Several hours of waiting, no help came from them,” he said.

Freelanews was informed that the calls were placed again to ambulance service when he was referred to LASUTH, they refused to pick up.

“When we took him to the hospital at Alausa and was referred to LASUTH, I called them again and they finally picked up after several attempts. I was informed that the issue then was that their ambulances were not working and there was nothing he could.

“It was a shame that the respondents sounded unconcerned and we had to make it to LASUTH by driving against traffic and shouting “Emergency! Emergency!”,” he lamented.

When Baale Oshin eventually got to LASUTH, he was attended to almost immediately, the wife told our correspondent.

“Before getting to LASUTH, I had called his elder brother, who is also a medical doctor, who must have also called LASUTH ahead of us to facilitate speedy attention for her dying husband,” she revealed.

“When we eventually got to the state hospital, there was no bed space, so my husband was attended to in the car,” she said.

It was revealed that Baale Oshin received intravenous fluids and other medical attention in the car he was brought in and parked in the premises of the hospital.

“We were asked to conduct some tests at the lab because we were told that the result would determine whether to take him into intensive care unit.

At this time, Baale was able to get a space in the hospital and was moved inside the male ward because the doctor insisted she would prefer to examine him there first.

“While the doctors were examining the result of the tests, my husband gave up the ghost at exactly 2:15am,” she reflected.

A gentle and easy-going personalty loved by all who came in contact with his person, Baale Oshin also worked with Lagos Television between 2006 and 2015. The talented broadcaster joined Choice FM between 2008 and 2010 after he left Yotomi Television in 2007.

He had also worked with Paramount FM in Abeokuta, the capital of Ogun State between 2009 and 2012. Other places he had worked included Radio Lagos/Eko FM, 2010-2015, Root FM in 2019 and his last point of call before his demise was Faaji FM which he joined in 2012.

Baale Dapo Oluwaseun Oshin, who will be buried on Friday, July 23, 2021, is survived by wife and four beautiful kids.

May his soul rest in peace.