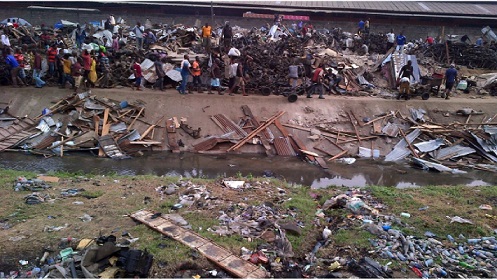 TRIXX NG reports that the officials of the largest spare part market in west Africa, Ladipo Market have spoken about the incident that happened yesterday which led to the death of one and injury of three people.

In a press conference held some minutes ago, the officials made it known that men of the Nigerian Air Force came to the market to lay claim to money refund of a key starter worth N3,500 one of them bought from the market.

The trader who sold it to them didn’t agree to their request because the period of warranty which is one week already elapsed. This led to round of arguments between them and created scenes that later turned violent.

It was also stated that nobody hit or slapped the officers as claimed before they started shooting traders in the market. After it all, about four people became victims with one dying and three getting gunshot wounds.

The officials made it known that they proceeded to the office of the NAF but had to leave because of the intimidation. They therefore vowed to take the case to the highest authority to get judgment.

At the moment, the market is on lock and key as a way to protest the unfortunate incident.

BREAKING! APC Lagos Treasurer Is Dead, Months After Battling Sickness In US