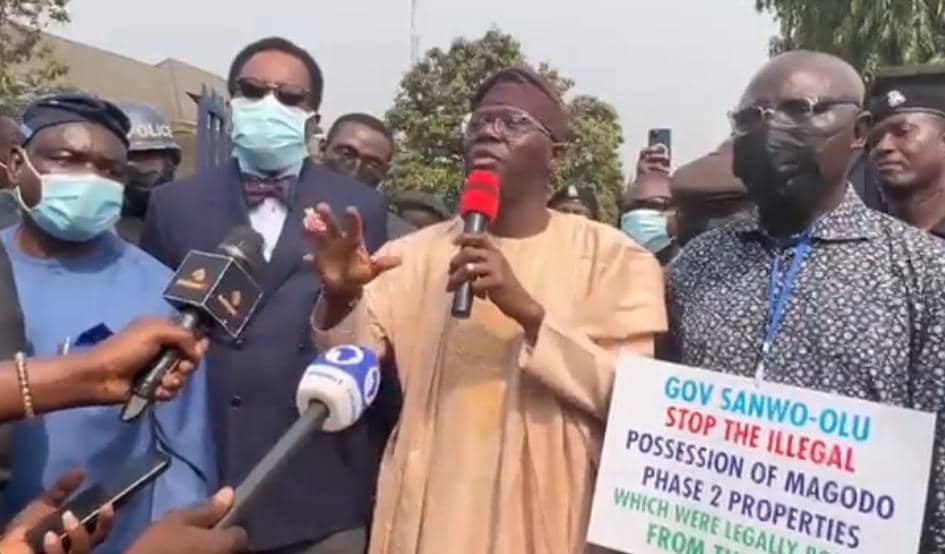 For some weeks now, there have been crisis at the popular Magodo phase 2 area of Lagos state involving landlords and suspected land grabbers who claim to be acting based on a supreme court judgment.

Due to this judgment, landlord were asked to vacate the houses for the suspected land grabbers who were allegedly supported by police officers.

The matter took a new turn today when the governor of Lagos state, Babajide Sanwoolu visited the estate to intervene and probably resolve the case. On his arrival, he was told that about 50 police officers were in the estate on orders of the inspector general of police, Alkali Baba.

On hearing this, the governor went to their location and spoke with the police CSP who led the team, asking him to withdraw the officers in the estate. Punch newspaper reported that the CSP bluntly rejected Governor Sanwoolu’s request while telling him that he is acting based on the IGP’s order and that the governor should contact the IGP.

Several reactions have trailed this new development as many believe Governor Sanwoolu should not have been disrespected in such a manner. At the end of the day, the governor had to talk to the residents while assuring them of a lasting solution to the crisis.

2023 is just one year to go and of course, Governor Sanwoolu is likely to seek a second term as governor of Lagos state. Magodo crisis is one factor that will determine his victory at the polls because so many people are interested in the case. With what happened today, many are expecting a prompt action to be taken by Governor Sanwoolu being the chief security officer of the state. He is expected to be on top of his security game and what happened today didn’t make him look like a competent security officer.

Except Governor Sanwoolu immediately reach out to the IGP and relevant authorities with a successful order to vacate the police officers from the estate, most Lagosians may not see his efficiency.

Already, the #EndSARS protest that reportedly led to the death of some youths has affected the administration of Governor Sanwoolu in some way, making influential youths express displeasure in him. This will definitely have an effect on his second term ambition.

On this Magodo crisis, except Governor Sanwoolu handles this well, it may affect his second term ambition.