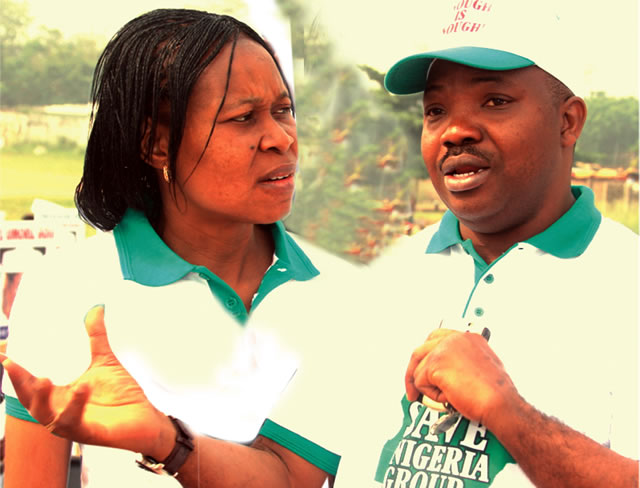 Dr. Joe Okei-Odumakin, wife of late human rights activist, Yinka Odumakin, has said that her husband did not die on Saturday as widely speculated but on Good Friday, April 2, 2021.

Odumakin made this known in exclusive interview with The Boss, supported with a press statement.

In the emotional statement, which was presented in a poetic style, Odumakin eulogized her husband saying that if “If breath was the currency of life and its legal tender…then, Yinka spent his breath on causes.”

According to her, even when her medical personnel were lamenting that his oxygen level was running low, the ebullient and fearless activist was reaching out for his instrument of work to do what he knows best.

Going down memory lane, she recalled the periods of ‘chains of pains’ in former Head of State, General Sani Abacha’s gulag, which birth their romantic affair

“Who meets and marries in detention at Alagbon?” She queried, spicing the narration that they were brought together by the best, late Gani Fawehinmi.

Inspite of being a ‘man’, Yinka married both the man and woman in her, she said.

Concluding, she reiterated that it’s not goodbye, but good night, see you later on the other side of God.

Below is the detailed statement:

YINKA: BASKING IN THE SHADOW THAT YOU CAST

If breath was the currency of life and its legal tender…then, Yinka spent his breath on causes.

My memories are rousing through chains of pains. A sea surge of a romance which sprouted in Gen. Sani Abacha’s detention.

My husband was not a criminal, neither was I. Our “crime” was standing strong for others as we always have been. We will return to the dingy detention cell in our reminiscences later!

Who meets and marries from detention at Alagbon? Only Yinka would ask! And only I would say YES!

We were introduced to each other by the most qualified, the most preeminent, and the most decorated of inmate – Chief Gani Fawehinmi (SAM, SAN).

Chief said: “Yinka, she’s a man!”. Yinka married both the man & the woman in me!

It was our truest solemnization of activist matrimony by a revered High Priest of the struggle…with the trench as our altar and the good of our people as our ultimate goal.

Yinka, it cannot be goodbye, It is goodnight and see you later on the other side with God.

Since no one is permitted in the Critical Care Unit, we had commited you to the care of the best qualified medics at LASUTH and the hand of God hoping to see you next morning.

The medics said they could not fathom how to immediately relay the message of your passage to me directly.

Now that I am in possession of your death certificate, I can see you passed at exactly 10.40pm on Good Friday (April 2nd, 2021) and not in the morning of Saturday, April 3rd, 2021) as initially communicated.

Due to the principles of the truth and saying it as it is, which Yinka and I hold dear – and which Yinka lived all his adult life for – it is important to immediately put this very important record straight.