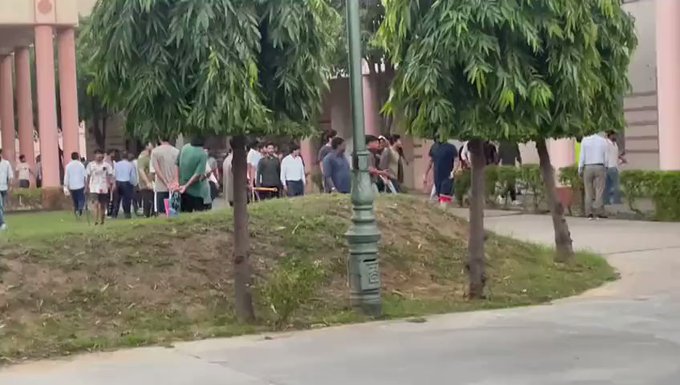 A group of 50-60 Nigerian students at GD Goenka University in Gurgaon have “temporarily” left their campus after some of them were allegedly thrashed and threatened by Indian students while playing football.

The Gurgaon police have registered cross FIRs against each group of students for allegedly thrashing each other at the football ground on Friday and creating a ruckus.

This comes nearly a month after Indian students staged a protest against foreign students over offering namaz at the football ground. The students allegedly raised “Jai Shree Ram” slogans and filed a complaint with the registrar to ask foreign students to offer namaz in allotted rooms. The administration said the matter was resolved amicably.

One of the FIRs has been registered on the complaint of a pharmacy student named Sultan Khan.

“Around 5.40 pm, I was roaming around campus when 4-5 Nigerian students came and started hurling abuses at me and beat me up… My friends… came to save me but the Nigerian students also thrashed them with rods and sticks… While leaving, they threatened to kill me and my friends,” reads the FIR.

The second FIR has been lodged on the complaint of a foreign student named Rabiu Md, who alleged that the Indian students attacked him and other foreign students inside the hostel and on the football field.

“The… local people came to GD Goenka University hostel with different weapons and started attacking the International students…Some of us ran out of college while some are trapped inside the hostel. They can’t go out because they are afraid for their life… many international students were injured yesterday by the same local Indians in the football field,” reads the FIR.

Rabiu told the Indian Express that around 60 students left the college campus and are now in Delhi. His friend Khalil alleged, “ The locals have been harassing us for a long time at the campus. They hurl abuses and harass us. They beat up some of my friends inside their hostel room for no reason. At the football field, they attacked us while we were playing. I asked them to leave but they ganged up and thrashed us. We are now in Delhi and have asked the embassy officials to help us”

The Gurgaon police said cases have been registered under sections of causing hurt and criminal intimidation. DCP (South) Upasna said, “There was a football match between the students and a group of boys got into an argument. They beat each other up. We have taken their complaints and the administration said they are resolving the issue. The matter is not related to the namaz issue.”

The university administration also said the matter was not communal. “There was a football match being played between two teams and they got into a brawl during the game over substitute players, which was sorted out with the intervention of university officials. There’s no relation to the protest that took place last month,” said Dr Dhirendra Singh Parihar, registrar at the University.

When asked about the chants of “Jai Shree Ram” on the campus and students leaving the campus, he said, “There were no chants. It was a simple fight between students. The administration has identified all the students involved in the incident and asked them to proceed on leave till enquiry by the university proctorial board. Not all 60 students have left. Some of them went to help their friends shift.

Pandemonium at Gurgaon University India as about 50-60 Nigerian students allegedly leave the campus “temporarily” after some of them were allegedly thrashed and threatened by Indian students while playing football. pic.twitter.com/NTMXPcO0it