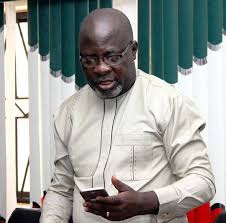 National Publicity Secretary of the Peoples Democratic Party, PDP, Mr. Kola Ologbodiyan, may have beaten more than what he can chew by calling on the forceful removal of a sitting Governor.

Ologbondiyan during a press conference on Tuesday 13th of June 2021, called on the Deputy Governor of Zamfara State to take over the seat of the Governor of the State, he equally berated the Police and other security agencies that forestalled the initial attempt by the said Deputy-Governor to forcefully and violently assume the office of the Governor of the State. This is in spite of the fact that there is no incident or record of the Governor resigning from office, neither had he been removed pursuant to the provisions of sections 180, 188 and 189 of the Constitution as discussed above. What is more worrisome is the fact that the P.D.P as a political party has filed a suit before the Court seeking an order directing the Governor to vacate his office on account of his defection to the A.P.C.

His reasons was based on the premise that Governor Bello Muhammad Matawalle of Zamfara State defected from the Peoples Democratic Party (PDP) to the All Progressives Congress (APC) leaving behind his Deputy-Governor in the PDP. Since then, all hell has been let loose in the PDP who have insisted that by reason of his defection, the Governor should vacate his office and that the Deputy-Governor should take his place.

Certainly, this call by Mr.Ologbodiyan apart from being an abuse of the Court process, it is equally contemptuous of the Court and most importantly treasonable.

This is because sections 190 (1) & (2) and 191 (1) of the Constitution clearly spell out the specific circumstances in which a Deputy-Governor can assume the office and powers of a Governor of a State. Section 190(1) &(2) deal with the Governor transmitting power to the Deputy –Governor if he (Governor) is to be away from the State on vacation or where he fails to transmit power, the State House of Assembly can by a resolution empower the Deputy to so act. On the other hand section 191 (1) deals with situations where the office of the Governor becomes vacant by reason of the occurrence of any of the incidents encapsulated in sections 188 and 189 of the Constitution. Clearly, there is no provision in the Constitution permitting the Deputy Governor of Zamfara State to take over or attempt to take over the seat of the Governor of the State without a valid and subsisting Court order.

This action of Mr. Ologbodiyan is treasonable to the extent that he has counseled and procured the Deputy Governor of the State to attempt to seize the reins of governance from the Governor, in a manner not cognizable or contemplated by the Constitution. This is clearly in violation of section 1(2) of the Constitution, which provides as follows:

“The Federal Republic of Nigeria shall not be governed, nor shall any persons or group of persons take control of the Government of Nigeria or any part thereof, except in accordance with the provisions of the Constitution”

Admittedly, this sets the tone for proceeding against Mr.Kola Ologbodiyan for his attempt to aid and abet treason in Zamfara State. Section 37 of the Criminal Code provides for the offence of treason as follows:

“Any person who levies war against the State, in order to intimidate or overawe the President or Governor of a State, is guilty of treason and is liable to the punishment of death”

“Any person conspiring with any person, either within or outside Nigeria to levy war against the State with intent to cause such levying of war as would be treason if committed by a citizen of Nigeria, is guilty of treason and is liable to the punishment of death”

Clearly, it is assumed that Mr.Ologbodiyan may have glossed over the grave implications of his outburst vide his press conference aforesaid, he is accordingly advised.

Whatever legal claim that the PDP might have over the seat of the Governor of Zamfara state can and should be domiciled in the four corners of the Constitution of the Federal Republic of Nigeria 1999 (as amended) and not the whims and caprices of the party or the ipse dixit of its Publicity Secretary. More specifically, it must be asserted that the call by the PDP for Governor Matawalle to vacate his office or their assumption that his office has become “vacant” must be circumscribed within the confines of the provisions of the Constitution on the conditions or reasons for the removal of a Governor of a State and not any other irrelevant or extraneous materials.

These are indeed a very tough and turbulent time for the PDP and their apologist but, the action and reactions of its Publicity Secretary, Kola Ologbondiyan as regards Zamfara State is definitely treasonable.