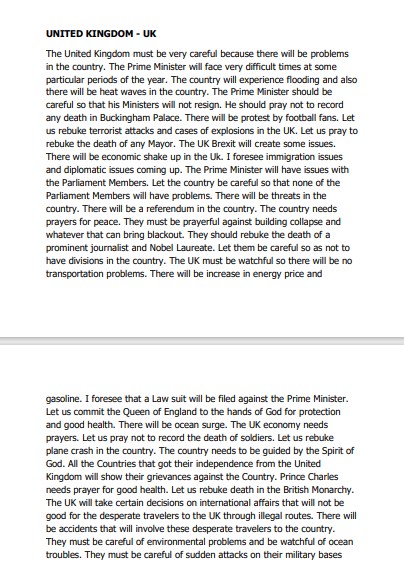 2022 will always remain a significant year in the history of the United Kingdom following some sudden happenings especially in the corridors of powers in the country.

The year witnessed the resignation of Boris Johnson as the prime minister, opening the way for a new PM, Liz Truss who was just appointed few days ago, Queen Elizabeth II was also announced dead yesterday after a brief illness after reigning for a whopping 70 years and the country faced some economic and climatic challenges that have not been recorded in years.

In the 90-page 2022 prophecies released by the man of God in the presence of journalists and media personalities around the world, Primate Ayodele noted that there will be calls for the resignation of Boris Johnson as the Prime Minister of the United Kingdom and that some of his cabinet members will resign.

‘’There will be litigation in the UK because of COVID 19. Some people will call for the resignation of the Prime Minister. The UK will still plunge into other crises. Let them pray against the death of a Member of Parliament. A Cabinet Minister or an Aide of the British Prime Minister will resign. World leaders will be fighting for democracy.’’ (pg 13)

In another series of divine signals in his annual prophecy book titled Warnings To The Nations 2022/2023 edition released earlier this year, Primate Ayodele revealed that the UK will experience serious heat waves and that there will be economic shake-up in the country.

Furthermore, in the United Kingdom, Primate Ayodele warned that the Queen needs to be committed into the hands of God because of her health. He then said prayers need to be done to avoid announcement of death in Buckingham palace.

‘’The Prime Minister should be careful so that his Ministers will not resign. He should pray not to record any death in Buckingham Palace. Let us commit the Queen of England to the hands of God for protection and good health.’’ (Pg 68/69)