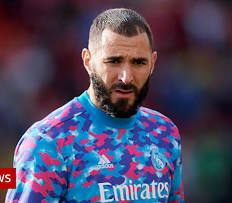 Real Madrid and France star Karim Benzema has been found guilty of conspiring to blackmail fellow player Mathieu Valbuena with a sex tape.

Benzema was one of five people on trial in Versailles, near Paris, over the 2015 extortion attempt over a sexually explicit video that was stolen from Valbuena’s phone.

Benzema claimed he was only trying to help his fellow player when he approached him about the sex tape at the French national team’s training centre in October 2015 and told him he could help him find someone to ‘manage’ the issue of the video.

But during sentencing on Wednesday morning, Benzema was handed a one-year suspended sentence and a €75,000 fine by the judge, in a sentence harsher than the one sought by prosecutors.

When the trial concluded last month prosecutors had demanded Benzema be given a 10-month suspended sentence and a fine of €75,000.

The maximum sentence the 33-year-old could have received was a five-year term in prison and €90,000 fine.

Benzema’s lawyer said the player, who was not in court in Versailles as he is due to feature for Real Madrid against Moldovan side Sheriff Tiraspol later in the day, would appeal against the verdict.

“This outcome in no way corresponds with the reality of events,” lawyer Antoine Vey told reporters afterwards.

It’s claimed in France the four other people on trial were found guilty of being directly involved in the blackmail attempt.

They were reportedly handed various punishments from an 18-month suspended sentence to two and a half years in prison.

Noel Le Graet, the president of the French FA, recently said the outcome of the trial would have no impact on Benzema’s chances of playing for the French national team.

Testifying on the opening day of the trial, Valbuena said the affair – which saw him and Benzema excluded from the national team – had left him feeling ‘frightened’ and fearful for his career.

Benzema was recalled to the France squad for this year’s European Championship. Valbuena, now 37, was a regular with France but has not played for his country since earning the last of his 52 caps in 2015.

In an interview with investigators in 2015, Benzema denied involvement in the blackmail plot, asking why he would get involved.

“I have enough money. I don’t need it,” he said at the time.