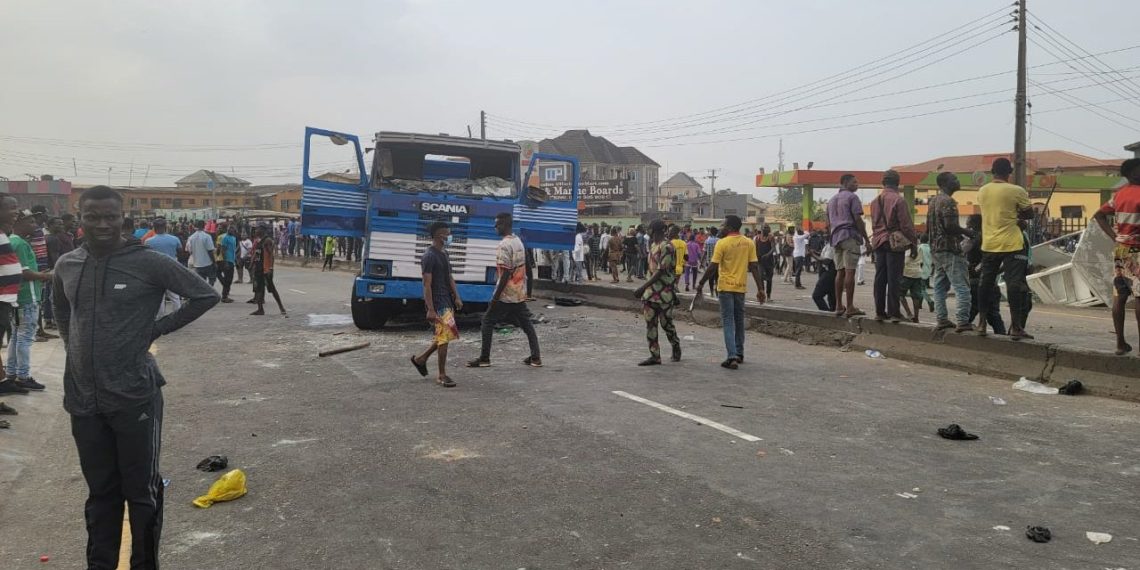 The Chairman of Ojodu Local Council Development Association, Segun Odunmbaku has revealed the identities of the victims of the truck accident involving several students of Ojodu Grammar School in Ojodu-Berger on December 7.

Trixx NG had reported how a truck on Tuesday rammed into some secondary school students in Lagos State.

The students were reportedly going home after closing from school around 2 pm when the disturbing incident happened.

In a 17-paragraph statement titled ‘Events of Fatal Motor/Pedestrians Accident at Ojodu Involving Students on Tuesday 7th December, 2021’, Odunmbaku said two students, Adedoyin Adebayo and Akpolebi Israel, died during the unfortunate incident while 12 others were injured.

The council revealed that those who survived the incident with injuries include seven females and five males totaling 12 victims.

The report reads in full: “Yesterday, December 7, 2021, at about 02:15 pm, a DAF truck with Registration No. APP 438 YA driven by one ‘Bolaji Kabiru’ rammed into some pedestrians at Grammar School Bus Stop along Ogunnusi Road later identified as students of Bab Fafunwa Millennium School, Ojodu Junior Grammar School, Omole Junior High School.

“Corpses of the dead students have been evacuated with the support of officers of the Federal Road Safety Corps and were deposited at the Morgue of the Mainland Hospital, Yaba, for autopsy.

“However, the angry students who were later joined by hoodlums set the accident vehicle ablaze, vandalised the Ojodu Police Station, operational vehicles of the men of Nigeria Police Force, the Vehicle Inspection Service, and some private articulated vehicles along Ogunnusi road.”

“My heart is broken for the families and friends of students who lost their lives in this horrible accident. This is a devastating tragedy, my thoughts and prayers are with everyone affected by the horrible accident,” Mr Segun mentioned in the statement.

The statement added: “My heartfelt condolences to the victims’ families. May God grant them the fortitude to bear the irreplaceable loss. While I give assurances that justice will be done, we have also commenced proper examination and analysis of the survivors.

“I implore us all to maintain the peace and remain calm, rather than take to wanton destruction of properties and facilities let us remember the bereaved families in prayer, allow the police to carry out a thorough investigation, and avoid seeking self-help.

“I appeal that we respect the family’s privacy. There’s a need for calm at this trying time.”

SAD! How Two Men Stabs RCCG Pastor To Death Inside Church After Giving Life To Christ In Lagos