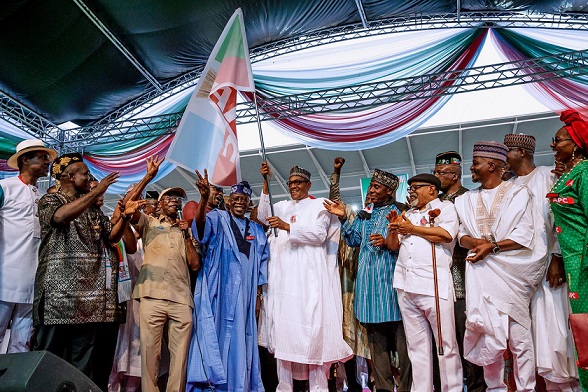 TRIXX NG reports that the national leader of the all progressive congress (APC), Asiwaju Bola Ahmed Tinubu is yet to make a statement concerning the ban of twitter enforced by President Muhammadu Buhari’s administration.

President Buhari with this move has violated the freedom of expression rights of every Nigerian citizens, as twitter has served as a platform where about 200 million Nigerians express their views about topical issues.

The presidency has said that twitter has threatened nigeria’s co-existence while making reference to the tweet of the president that was deleted by the microblogging platform for violating the rules of the platform. In his tweet, President Buhari referred to the civil war that took the lives of many while threatening to unleash terror on some persons in the south eastern part of the country.

Due to this, many Nigerians have expressed shock and disdain at the President’s action, most especially the youths who make use of twitter as a means of livelihood but the national leader of the APC, Bola Ahmed Tinubu who is known for making reactions to topical issues as this has remained silent.

It is a known fact that Tinubu is one of the mastermind behind the emergence of Buhari as the president of Nigeria, as he gave him the platform to become the president, it is now shocking and sad that Tinubu is unable to air his opinion on the pressing issue of violation of human rights by the President Muhammadu Buhari’s administration