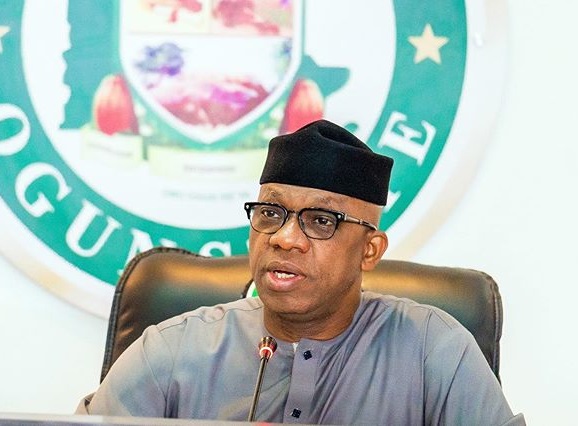 The Ogun state Governor, Dapo Abiodun has come under serious condemnation and attack following his purported achievement list on sport posted by his aides.

Several sports lovers across the state have described the achievements’ claim by the governor as outrageous and outlandish.

The Senior Special Assistant to the Governor on New media, Emmanuel Ojo had last week Sunday posted purported achievements of the governor in the last three years.

Ojo, in the post listed some things the governor has reportedly done to improve on sport in the state.

The Governor’s aide in the post circulated on social media platforms like Facebook, Twitter and WhatsApp said the governor had set up a committee that would help nurture the talents in sports of the youths of the State.

In the post, the Governor’s aide also claimed that the governor had renovated some sports facilities across the state including the NYSC camp.

But residents of the state insisted that many of the claims by the governor is not true and unfounded.

As against the claim by the government that it has improved the status of the three stadia in the state, findings revealed that the stadia are in bad condition and sorry state.

It was observed that the stadia cannot host any international condition because of its condition.

During investigation, this reporter observed that the facilities at the MKO Abiola stadium are in comatose.

From the shooting range, Abula court, are in bad condition for our athletes to use, while the mainbowl pitch has been condemned to hosting of APC political rally, since the League Management Company (LMC) has banned the MKO Abiola stadium, Kuto, Abeokuta from hosting ordinary division 2 league matches let alone selected for international competition.

It would be recalled that the multi-billion naira Stadium was placed on ban by LMC early this year because of its dilapidated nature.

The stadium has become unsuitable for hosting any NFF recognized football matches which has now forced all the clubs in the state to relocate to the Dipo Dina International Stadium, Ijebu Ode.

A situation that has led to some opposition party members in the state to attribute the neglect to a deliberate plan by the State governor to move all sports activities to Ijebu Ode his hometown.

Our reporter gathered that, sports in the primary and secondary schools have gone moribund, government has allegedly canceled or give little time for sports extra curricular activities in the students time table.

Adeoye Ogunlana in one of the WhatsApp discussion described the claim by the government to have improve the sport sector in the state as watery lies.

Ogunlana who stressed that the government only paint a part of MKO stadium in the Abeokuta, maintained that the Abiodun led administration has not done anything tangible in the sports sector.

He noted, “It’s sheer waste of time talking about sports under this government.

“Even at that, is it not shameful that the major contribution made to the state owned Football Club is the renovation of a storey building? Too bad!. Yes painting alone sef na renovation.”

Also, a sport stakeholder who pleaded anonymity revealed that the sport development programme by the Abiodun’s government is a ruse.

The source hinted our reporter that there is no clear-cut sports policy for the Sports Commission established by the present administration in the state.

He explained, “The sports commission proposed by Dapo was just a lip service to satisfy the interest of his business friends since 2019 the move was initiated, the Commission has failed to be inaugurated or institutionalized.

“Since Kunle Soname, who is the Chairman of Remo Stars refused to take up the DG position of the Commission, the governor is bereft of idea on how to drive the commission to achieve its projected objectives just like Lagos and Rivers are enjoying the dividends.

Another resident, Wale Adefemi said, “how can a sensible governor, equate painting of a building as achievement in sports when other states are building talents and competing for honours at National Sports Festivals, it took a protest by our athletes to Edo National Sports festival last year before the governor released fund for the state contingents a day to the festival without proper preparation and camping. What a shame.

“The fire brigade approach by this government to sports is nothing but a sheer irresponsibility.

“It took the intervention of Adron Homes to save the state government from shame by renovating the dilapidated Sagamu International Stadium for its Adron games in 2021”.