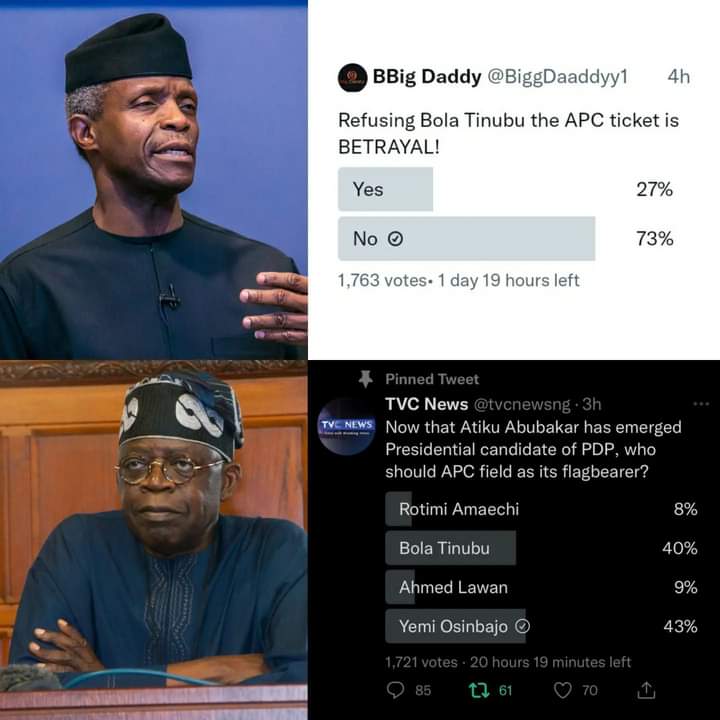 Ahead of the presidential primary of the ruling All Progressive Congress, APC, a now-deleted poll conducted by TVC, a Nigeria-based broadcast outlet, tipped Vice President Yemi Osinbajo as the favourite for the party’s ticket.

The television station, which is reportedly owned by Tinubu, on its official handle Wednesday, conducted an APC primary-themed poll asking, “Now that Atiku has emerged as PDP presidential candidate, who should APC field as their flag bearer?”

After 1,721 people had voted, with Osinbajo leading with 43%, followed by Tinubu with 40%, Amaechi with 8%, and Lawan with 9% of the total votes cast, the tweet was deleted, Quest Times reported.

In related news, a Twitter handle “@BiggDaaddyy1” known to be a dogged follower of the Asiwaju camp, and who was simultaneously hosting a Twitter space, had to delete his poll which asked: “Refusing Bola Tinubu APC ticket is a betrayal; YES or NO?”.

This is not the first time the Vice President will defeat his opponents in an opinion poll, Quest Times reported.

Squad: The next generation payment solution for African merchants