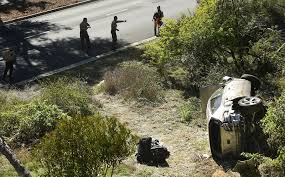 US golf legend Tiger Woods was undergoing surgery for multiple leg injuries Tuesday after a serious car crash in which his vehicle flew off the road near Los Angeles.

The Los Angeles County Sheriff’s department said Woods’ SUV sustained “major damage” after the roll-over crash, which did not involve any other vehicles.

The car’s sole occupant, Woods was removed from the wreckage by firefighters and paramedics. He suffered “multiple leg injuries,” his agent said in a statement.

“He is currently in surgery and we thank you for your privacy and support,” said Mark Steinberg.

Woods was removed via the windshield and taken to a local hospital for treatment.

The crash occurred near the hilly Palos Verdes peninsula, at the bottom of a steep stretch of road which has runaway truck ramps for vehicles that lose control going downhill, and which is notorious for numerous fatal accidents over the years.

“It’s a steep grade where you can pick up substantial speed,” sheriff spokesman Michael White told a local CBS affiliate. “And he was headed downhill at the time.”

“I believe he was conscious” when deputies arrived at crash, added White, who said he had been informed that Woods has “non-life-threatening injuries.”

The car could be seen lying on its side on a patch of grass some distance off the road, with its hood badly damaged, having apparently flipped over several times.

Woods, one of the most successful golfers of all time, has won 15 major golf championships.

He recently underwent his fifth back surgery, and said he was uncertain if he will be able to play at the upcoming Masters, which he last won in 2019.

– ‘True champion’ -Woods, 45, was in the area for his annual Genesis Invitational golf tournament at the Riviera Country Club.

“We have been made aware of Tiger Woods’ car accident today,” PGA Tour commissioner Jay Monahan said in a statement.

“We are awaiting further information when he comes out of surgery. On behalf of the PGA Tour and our players, Tiger is in our prayers and will have our full support as he recovers,” he added.

“Get well soon, Tiger. You are a true champion!” said former US president Donald Trump in a statement via spokesman Jason Miller.

Woods made an astonishing comeback from a series of career-threatening injuries and personal problems to sensationally win the Masters in 2019, his first major title since the 2008 US Open.

He was one of the most revered athletes in the world when he became engulfed in scandal in late 2009.

Woods smashed his car into a tree and a fire hydrant outside his luxury Florida home, sparking a series of scandalous revelations that doomed his marriage and put his game in freefall.

He later divorced from his Swedish wife Elin Nordegren, with whom he has two children, after a cascade of women came forward to say they had affairs with the golfer, making him fodder for tabloids around the world.

Woods underwent four back surgeries between 2014 and 2017.

‘I Have A Sugar Mummy And It’s Fun’ – Musician, Joeboy Makes Shocking Confession