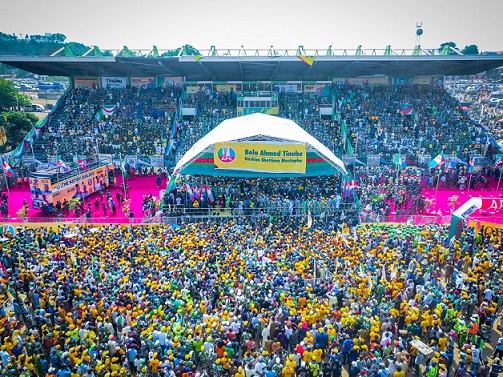 TRIXX NG reports that the presidential candidate of the All Progressive Congress (APC), Asiwaju Bola Ahmed Tinubu survived a mishap at his campaign in Ogun state earlier today.

In a video sighted by this publication, Tinubu who was dancing on the campaign vehicle he was on got carried away and turned while the vehicle was on motion.

He staggered a little and quickly held on to the brace of the vehicle to prevent him from falling off.

It is worthy of note that Tinubu always get in the news whenever he holds a presidential rally either for the good or bad reasons. Some of the slangs attributed to him all came from his rallies. He has also committed several blunders during these rallies which started few months ago.

Just yesterday, he mistakenly referred to the PDP presidential candidate, Abubakar Atiku as the former governor of Anambra state.