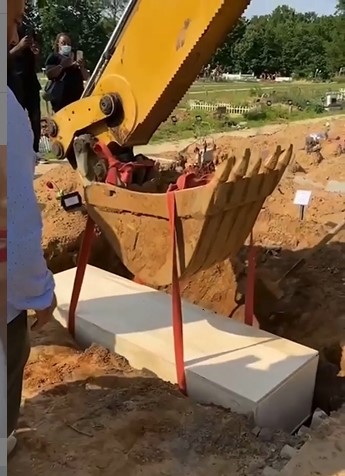 TRIXX NG reports that popular musician, Olanrewaju Fasasi popularly known as Sound Sultan has been buried yesterday after his family announced that He died in the early hours of the day.

His burial happened yesterday too and of course, it was a sad moment to watch. His wife was seen devastated and indisposed with the sudden news that will always have an impact on her for life.

In a video making rounds, His corpse was seen dropped underneath the ground by a caterpillar while those in the premises cried and express pain following the death of the talented musician that has attained the legendary status.

Since his death, several tributes and condolences have been flying on the social media space.

He was aged 44, May his soul rest in peace