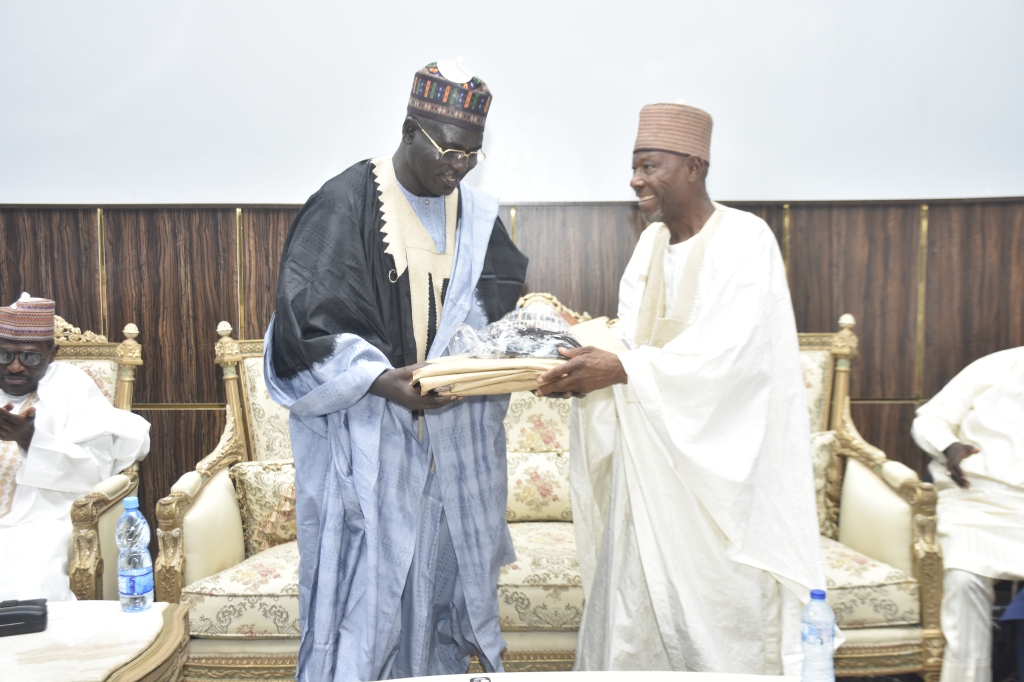 John Quincy Adams once said, “If your actions inspire others to dream, learn, do more, and become more, you are a leader. “This aptly described the growing influence of the legendary acts of Ambassador Lt Gen. Tukur Yusufu Buratai (CFR) as members of the forum of all Ex-Local Government chairmen of Borno state paid him a visit at his prestigious Tukur and Tukur’s farm Located at Gora in Karu local government area in Nasarawa State, about 40 kilometers from the Federal Capital Territory (FCT) along the Abuja-Keffi expressway on Wednesday, November 23rd, 2022.

The forum led by their leader, Mallam Bulin Maumeri, stated that their mission was to appreciate Buratai for his immense effort in taming the insurgency in North East, especially Borno state under his leadership when he was the Chief of Army Staff.

Mallam Balin in his speech stated that the entire people of Borno state and particularly the forum are proud of him. They noted with great pleasure his numerous achievements in the course of his career as a GENERAL in the Nigerian Army and his selfless service to humanity.

“The Forum warmly welcomes your resolve and entry into the political arena of Nigeria with your widely acknowledged sterling qualities and experience, more so, pitching your tent with our great party, APC. Our visit is to pledge our support and willingness to align with your political aspirations now and in the nearest future. We have very strong grips of the grassroots not just in Borno state but across the 774 LGAs in Nigeria. We, therefore, identify with you and offer our platform to build a Buratai Political Dynasty due to your outstanding honesty, humility, sagacity, intellectual capacity, and astuteness.”

Buratai in his speech appreciated them for honouring him. He called on the people of Borno and the Forum to support the APC candidates in the forthcoming election in 2023 with all available resources.

It would be recalled that the emergence of Lt. Gen. Tukur Yusufu Buratai as Nigeria’s Chief of Army Staff (COAS) and leader of the counter-insurgency operations was the turning point in the war against the insurgents who have literarily occupied large chunks of the Northern part of Nigeria. His colleagues in the Military celebrated his appointment because they knew he had the nerve, courage, and capacity to give Boko Haram terrorists a bloody nose.

And Buratai flaunts enviable credentials in such warfare. Sequel to his leadership of counter-insurgency operations, Gen. Buratai had carved a niche for himself as Commander of various military operations in the dreadful days of the Niger Delta militants and elsewhere. He also piloted affairs of the Multi-National Joint Task Force (MNJTF). He came to lead the counter-insurgency operations loaded like a volcano waiting to explode in the battle turf against terrorists.

Quite sensibly, the former Army Chief realized that he needed to raise a strong and professional Army from the decrepit soldiers he inherited. A philosopher, Confucius once cautioned that “To lead an untrained people to war is to throw them away.”

Therefore, Gen. Buratai quickly reformed the Nigerian and adequately prepared them through special trainings for the arduous national assignment. Sooner than later, the Nigerian Army was as fit as a fiddle to chivalrously face terrorists on the war front.

In a fresh and renewed confrontation with Boko Haram terrorists in the Northeast battlefields by the last quarter of 2015, the Nigerian troops led by Gen. Buratai rapidly began demolishing and consuming Boko Haram insurgents. Nigerian troops speedily gained ground against terrorists through astounding military exploits.

It manifested in the sustained scampering of Boko Haram terrorists through unwinding labyrinths and bush paths in the face of the mightier Nigerian troops. The rough, unmotorable and almost inaccessible terrain of the Northeast was a natural defense bulwark for the scared and fleeing terrorists. Insurgents resorted to the use of motorcycles to escape the wrath of soldiers.

The astute strategist, Buratai discovered that insurgents used motorcycles to shield themselves against a conclusive chase to their hideouts by Nigerian forces. He, therefore, countered the barrier, by introducing the squad by the name, “Motorbike Battalion.” He flooded the Northeast region with troops on motorbikes and escaping insurgents were chased by troops to their remotest hideouts and neutralized.

It took the General no time to decimate the formerly rampaging terrorists. Insurgents ostensibly became enfeebled by the strength and pressure mounted on them by Nigerian troops.

The leader of the counter-insurgency operations is an embodiment of innumerable war strategies and tactics. The nightmare of insurgents was further compounded with Buratai’s launch of the Special Strike Teams. He sometimes, joined his subordinate Commanders to train them personally. He unleashed the Special Strike Teams in different parts of the Northeast who were under strict orders to proactively assail insurgents.

Unrelenting, LT Gen. Buratai started expanding its military presence in the troubled Northeast region. He established a dozen Army Battalions and Forward Bases to make it easier for troops to respond to distress calls or emergencies in a flash.

And determined to make insurgents uncomfortable and protect the most vulnerable communities, he expediently established the 8 Division, Nigerian Army at Monguno to make coordination of smaller operational units of the “Operation Lafia Dole” more convenient and effective.

In order to frighten terrorists, Buratai personally led troops into the trenches fighting and howling out directives in the heat of battle. Buratai’s physical presence in the trenches and frontlines was a big blow to the psyche of terrorists whose plans were instantly dissolved at the frontlines during fierce battles with troops. It was a psychological wreck on insurgents and their warfare plans. But it boosted the morale of troops and all Nigerian territories seized and occupied by insurgents were reclaimed in a jiffy.

The fall of the Sambisa forest in 2016, was a new dawn in counter-insurgency operations. The remnants of terrorists rather became too scared of their shadows. They took to hiding to escape the viciousness of the Nigerian Army. It was daybreak for Boko Haram factional leader, Abubakar Shekau who had to disguise himself as a woman, dressed in a black hijab to escape the Northeast into Cameroon.