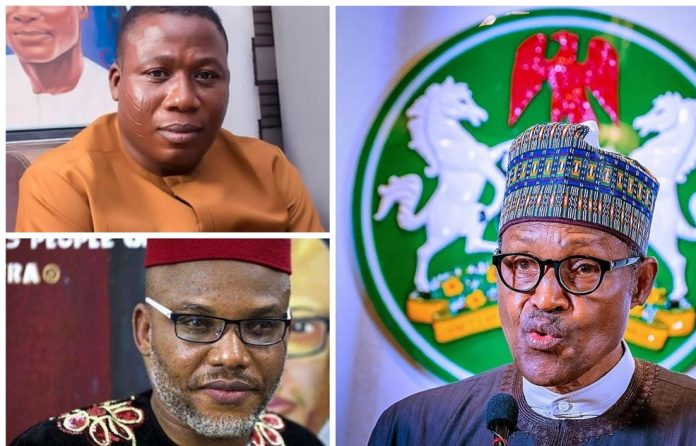 The pan-Yoruba socio-political organisation, Afenifere, has reacted to calls by some Nigerians, urging the group to emulate Igbo leaders and approach President Muhammadu Buhari for the release of the embattled Yoruba nation agitator, Sunday Adeyemo popularly known as Sunday Igboho who is currently in the custody of the authority of Benin Republic.

Trixx NG recalls that stakeholders in the Southeast recently met President Buhari, appealing to him to release the leader of the Indigenous People of Biafra, Mazi Nnamdi Kanu who is also in custody of the Department of State Services (DSS).

The president had assured the leaders that though it was a tough request, he would consider releasing the secessionist who was recently rearrested from Kenya after jumping bail in 2017.

Some followers of Igboho had also appealed to the Afenifere to beg Buhari for his release.

But in a statement on Friday by the General-Secretary of the group, Sola Ebiseni, Afenifere said there is no basis to beg the president, stressing that the Oduduwa Republic agitator committed no crime.

“We do not have to beg the President to release Sunday Igboho. Sunday Igboho did not commit any offence whatsoever; that’s our position.

“Those who went to invade his house were terrorists in Nigerian security uniform and they have no right whatsoever and that has been tested in a court of competent jurisdiction. Igboho has been absolved and the government was visited with N20bn worth of damages.

“In spite of the impunity of the Buhari government, we insist that Nigeria shall not be governed except by the rule of law,” the statement added.