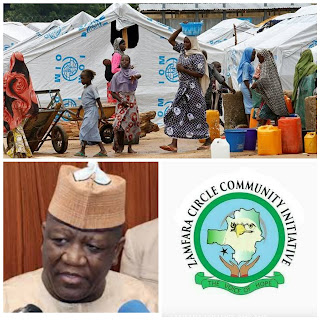 The distribution of Ramadan palliative by former Zamfara Gov Abubakar Yari to IDPs currently going on in Zamfara state is an effort worthy of commendation from all well meaning Nigerians, particularly those who are quite conversant with the state of IDPs in the country.

The distribution of the foodstuffs by the former Gov which is being coordinated by an agent of politics and non governmental organisation called Zamfara Circle Community Initiative, have no doubt go a long in atleast relieving some of the difficulties of the IDPs in Zamfara state.

Reports have it that the NGO/ agent of Yari political campaign has so far distributed large volume of the palliative to several camps of the IDPs in the state in the name of supporting the IDPs Yari himself created during his reign.

The gesture has no doubt helped the vulnerable in the IDP camps and put smile on the faces of the needy as shown in an opinion poll I have conducted in some of the IDP camps I visited in the state while trying to evaluate this exercise.

The controversy surrounding the motives of the exercise is however a subject of discussion that attracted this piece of write up.

I have weighed the validity or otherwise of each of the sides of the arguement and feel obliged to add my voice to the debate.

Many people see the gesture as a welcome and meaningful contribution to the welfare of the IDPs, while many others equally see it as untimely and playing with the intelligence of Zamfara people to secure political popularity and sympathy for the former Gov, as it came when Yari is fighting the APC and Zamfara government under the leadership of Gov Bello Matawallen Maradun.

However, what remains indisputable is the fact that Yari, as the former Gov of the state would have averted this political populism exercise if he had done the right thing when he had the opportunity during the 8 year reign of his government when he was the Gov of the state.

Many people kept wondering as many others keep asking questions that are left unanswered; Where was Yari when the IDPs emerged during the 8 year period he ruled the state as governor?

How has Yari’ government handled the issue of IDPs that situation and conditions of the IDPs degenerates to the present state of the IDPs?

Did the former Gov allowed the husbands, parents, relations and guardians of the IDPs to be carelessly killed just for him to use them as tools for his political campaigns or deliberately refused to take the issue of security as serious as the constitution of the Federal Republic of Nigeria required him to when he was entrusted with the lives and property of the people of Zamfara state due to ignorance of the fundamental human rights laws or flagrant abuse of the constitution of the Federal Republic of Nigeria?

Did Yari knew that if he had taken the conflict between Vigilante groups and the Fulani in Zamfara state properly with due deligence, banditry would have been averted?

Did Yari know that if he had been on top of issues in the fight against bandits like the current Gov Bello Matawallen Maradun does, the distribution of such palliative to IDPs isn’t necessary, instead something else would have provided to the poor in the state. Did Yari realise that if he had concentrated his primary responsibility on providing good governance as being campaigned by his agent of politicking, the Zamfara Circle Community Initiative, the conflict between the two rival groups( Yansakai and Bandits) wouldn’t have emerged?

Did Yari forget when copies of the Holy Quran were being thrown into toilets without any serious action to stop the menace by his government, in a state that implements shariah law.

Instead, Yari relocated to Abuja frequently visiting the UK, US and the Middle east, turned the secondary responsibility of the Nigeria Governors’ Forum as his primary responsibility, always attending series of meetings in Abuja discussing political maneuvers and agenda, including high level corruption in order to always be at the helm of affairs of this country, abandoning people that elected him into power at the mercy of the marauding bandits.

Yari is now paying for his careless miscarriage of justice to the innocent people of Zamfara state and it is nemesis thst is now hunting him. He is now a wounded lion struggling to fix himself and his political associates into the scheme of things with no success in sight.

If this futile exercise by Yari and his hired agents, the Zamfsra Circle is not political, why shouldn’t he give his contributions to the government to do it through the state ministry of humanitarian and disaster management as did other contributors like Dangote, Tinubu, Zulum etc, which the ministry has been doing along with the state government paliative and other humanitarian supports it has been rendering to the IDPs, rather than channelling the distribution through an organization that is being accused an agent foreign enemies blindly criticising the govternment? It is therefore time for Yari and his co-travellers to stop deceiving the people, join hands with the present government of Matawallen Maradun to build strong Zamfara state, rather than the do or die kind of political opposition he and his co- travellers engaged into, destabilizing the unity, understand and cooperation among the hitherto one family state. This, I strongly believe will support consolidate the gains and the successes being achieved by Gov Matawalle in the fight against insecurity in the state, so as to secure the lives and property of the people he is clamouring to rule for life.

Godwin Eze Nwanta is a public affairs commentator at no 78 Oshodi Lagos.