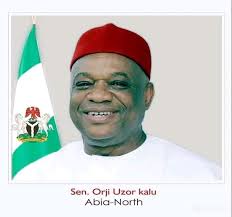 The Senate Chief Whip,  Senator Orji Uzor Kalu has slammed the likes of the national leader of the All Progressives Congress (APC) Bola Tinubu, Vice President, Prof. Yemi Osinbajo and other presidential aspirants from the South West and South-South.

Speaking in an interview on Channels Television’s Politics Today, Kalu, a former Abia governor, said any candidate contesting the presidency he or she is not from the South-East is a betrayer.

According to Kalu, the position of Presidency ought to be zoned to the South East.

“Any southerner that is not from South East and is coming to run for president is a betrayer. They are the ones betraying us.”

Kalu also revealed that he is willing to be a “sweeper” at the Presidential Villa if Senate President Ahmed Lawan emerges as President.

“With Ahmed Lawan, I am ready to be the sweeper of the place (Aso Rock). I don’t need to have a position if Ahmed Lawan is the president,” he said.

“I can sweep the Villa; my house is very close to the Villa. I can be the sweeper of the Villa; it is just a stone’s throw. I am not joking.

“I have known him 41 years ago. We were roommates at the university. He is strong enough to give the Nigerian people what they are looking for,” he said.

As far as he is concerned the Senate President played a vital role in stabilizing the Nigerian parliament. He said several bills have been passed by the lawmakers under Lawan’s leadership, a development Kalu said will be replicated at the Presidential level if Lawan wins.

He added that some APC presidential aspirants have agreed to step down and back Lawan to succeed President Muhammadu Buhari in 2023.

Related Topics:APCOrji Kalu
Up Next