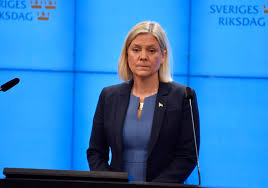 Trixx NG learnt Andersson quit the post when her coalition partner, the Greens, quit the government.

She, however, said she was ready to try again as leader of a single party government.

“I have told the speaker that I wish to resign as prime minister,” Ms Andersson told reporters at a news conference.

Hours before being dramatically forced to stand down, Ms Andersson had called it “a special day”, coming 100 years after Sweden allowed female suffrage.

Ms Andersson was elected by the slimmest possible margin after clinching a last-minute deal with the Left Party to raise pensions in exchange for its backing in Wednesday’s vote.

Despite being a nation that has long championed gender equality, Sweden has never had a woman as prime minister.

All other Nordic countries – Norway, Denmark, Finland and Iceland – have seen women lead their governments.

JUST IN: Seyi Tinubu Talks On Replacing Governor Sanwo-olu As Lagos Governor In 2023