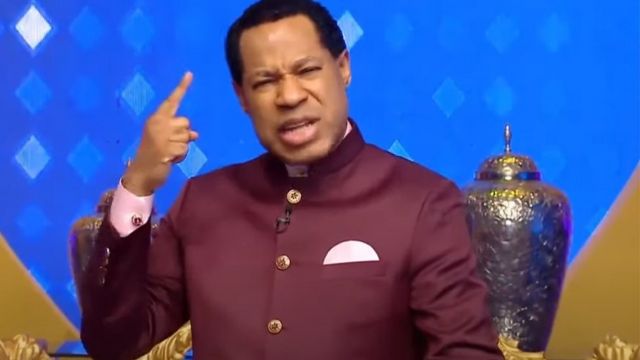 The National Inter-Faith Religious Organizations for Peace (NIFROP) has blasted the founder of Christ Embassy, Pastor Chris Oyakhilome, on his stands on COVID-19 vaccines.

In a statement released, the faith-based group accused the man of God of capital murder for asking people not to take the Covid-19 vaccine, which will according to them, save lives.

According to the faith-based group, the sanctity of the pulpit should not be abused in this manner as it is totally unacceptable that persons who should minister healing are teaching rebellion.

NIFROP disclosed this in a statement by its Director of Media, Reverend Samson Edeh. It believes Oyakhilome got it wrong because COVID-19 vaccine saves lives.

The statement read, “It is our view that Jesus Christ could have healed the blind man as recounted in (Jn. 9:1-7) by merely declaring healing but still chose to use mud because the things created by God are meant for the use of mankind in all ramifications including in the restoration of health and prevention of ill health. The vaccines that Pastor Chris ignorantly canvassed against were researched, developed and produced by human beings created by God in addition to being sourced from sources created by God, so how can they be anti-faith as he proclaimed?

“We find it worrisome that Pastor Chris continues to exploit the people in Nigeria owing to the sectarian sensitivities that allow him to get away with capital murder. It is on record that the regulatory agency for broadcasting in the United Kingdom, Ofcom, slammed him with more than N65 million in fines for spreading the same falsehood through his Loveworld Television. Had the institutional framework in Nigeria being as robust as it is in the United Kingdom, this charlatan would have been slammed with fines in the vicinity of billions of naira, given the potential damage that his unsubstantiated claims would cause the populace.

“NIFROP encourages Nigerians irrespective of their creed to continue to take the vaccine and adhere to all guidelines and protocol for managing the spread of COVID-19 virus because it is right to do so.

“We appeal to the clergy not to shy away from exhorting their members to take the COVID-19 vaccine, which requires faith to be effective anyway. Those entrusted with being shepherds of the flock should not become the death of the flock entrusted to them in a bid to be populist compliant. The fact that some hardcore conspiracy theorists are demonizing vaccination against COVID-19 is not enough reason for people who call themselves men of God to go cheap.

“We further call for those who truly worship God to rise up in condemnation of the misleading campaign that Pastor Chris is waging to discourage people from being vaccinated and thus prevent themselves from falling ill or even dying. No true pastor will encourage his congregants to be suicidal irrespective of how attractive such an option appears to those who have become indoctrinated to not see the danger that their spiritual mentor poses to mankind.

“We demand that the relevant agencies in Nigeria follow the path of Ofcom and visit Pastor Chris Oyakhilome with the corresponding sanctions for all the infractions he has committed in Nigeria by putting out the wrong information about the vaccine.”

Recall that the United Kingdom government had fined Pastor Oyakhilome, £125,000 for unsubstantiated conspiracy theories about COVID-19.